Oaxaca 2022: May They Rest in Peace/QEPD

It has been ten days since I arrived back in Oaxaca after my departure in March 2020. As a neighbor told me before I arrived here: "Oaxaca is totally the same, and completely different". She was absolutely right. My ride into Oaxaca presented scenes that were unchanged from 2020. The only big difference was the number of masked people in the streets: almost everyone. Upon arrival, my apartment looked as if I had never left.
But then the "difference" began to show its face. The morning after I was back I set off to visit some of the people I had photographed for my oficios project. My first stop was a couple of blocks from my apartment, Liz the seamstress.
She saw me walking down the street and waved me over. After greeting each other and sharing our gratitude that we were both in good health, she went on to tell me that Dario, the blacksmith a half block down the street had passed. He was 80 and died of a heart attack. I had just finished writing his story right before I left Oregon. After leaving Liz I went straight to Dario's workshop to see his family. As I entered to see his daughter, I saw an altar set up for him with the last portrait that I had taken of him framed and in the center. I was very touched. She then told me that another blacksmith I had photographed a few blocks away, Jorge Diaz, had also died. Jorge's death was causwd by complications from diabetes. I am not sure if covid was involved. When I went to Jorge's shop on Xichotencatl to see his brother Moises, it was no longer there.

I was already aware that two other friends from the project had passed since I left, Manuel Garcia, silversmith, and El Pollo, Cantinero (tavern owner). Manuel died of covid at age 78 and Pollo of a hard living at the age 85.

The next morning I called Benita, a palm weaver who makes beautiful baskets as I wanted to purchase a couple more. When I asked how she and her husband were doing, she told me that her husband Braulio has died a few months earlier. For many years Benita had been doing dialysis o Braulio three times a day in their home. His death was caused by kidney failure.

Tonight I got in touch with the son of Israel Rojas, the sandal maker (huarachero) to find that he also has passed away this past November. HIs son, Ivan, told me that he died of natural causes at the age of 86. He was pleased to say that Israel was conscious and alert until the final moment.

I am deeply saddened by the departure of these friends. Over the past few years we have opened our lives to each other. We have formed bonds of friendship that are unique in many ways. When I communicated with Israel's son, Ivan, tonight he sent me a picture of a photo collage they had hanging in their home. It brought tears to my eyes to see the photos I had given them in such a place of honor. It makes me very happy to know that people value these photos as much as I value these people.

I also found out tonight that another friend from the project had died, Luis Sarita, talabatero (leahter artisan). Luis died from a blood disorder. He was an avid fan and player of Pelota Mixteca. His friend, Alberto Pacheco informed me that they carried his coffin to the playing field and gave him a final send off in the manner he would have appreciated.

The wheel of life and its culminating act, death, never stop. I am honored to have known these fine people. They have made my life much fuller. 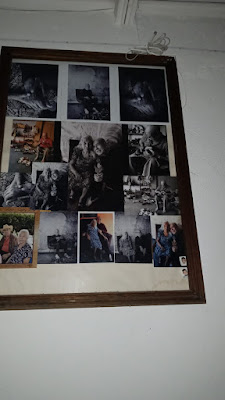 A wonderful tribute to your friends Deekardo! So many memories. Our friends bless us!

Ah ... Deek. What a gift you have given to these families. Their loved ones will be remembered by those families and by any more who knew them because of you.
Warmly, Dianne