Teodoro Bautista Perez: The Earth Beneath his Feet 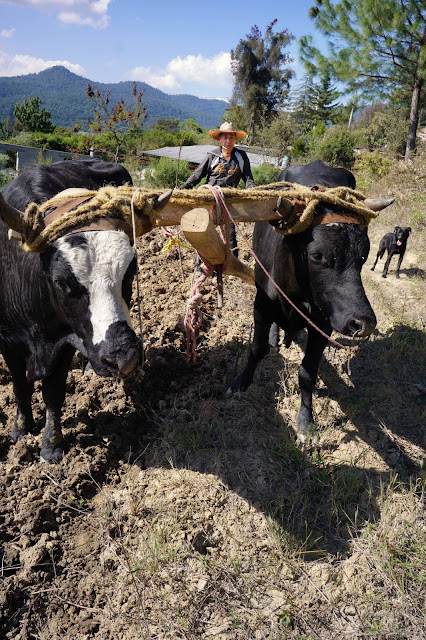 Teodoro Bautista Perez is a campesino in the most traditional sense of the word. He started to work the land under the guidance of his grandparents in the sixties when he was ten years old. They had learned from their grandparents and the traditions of working the land were passed on from generation to generation with much pride and respect. At age sixty-eight, Teodoro has changed the way of working the land very little since his childhood. He has his junta de toros (team of oxen) and besides planting his own fields, he contracts out to plow the fields of others in Capulalpam de Méndez. Since the countryside is very hilly and the steep slopes make it dangerous to plow with a tractor, the junta is the only way to go. The animals do not damage the earth as much as the heavy tractors that tear up the hillsides and open them up to erosion. Teodoro still makes the wooden ploughs and yokes for his junta. It is part of the tradition passed down from his grandparents. It is about being self-sufficient. 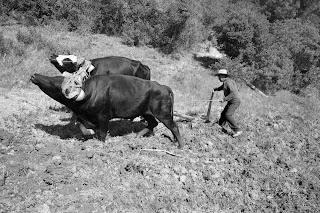 Teodoro reminisced of the days when ninety percent of the families in Capulalpam grew their own food and worked the land with their own junta. Now he claims, there may be thirty percent who farm the land and there are only three teams of oxen left to do the plowing. Despite the seeming timelessness of Capulalpam, some things have changed. "In the old days there was plenty to eat: corn, beans, wheat, animals that we raised. But we had little money to buy clothes and shoes and other things that we needed. People worked hard and we got by. Nowadays people have become flojo (lazy). Farming is hard work. Es muy duro, pesado.  People are abandoning working the land”.

Fewer and fewer of the youth in the pueblo are interested in farming. Now that there is a secondary school in Capulalpam, young people have other options for earning a living. Those who can afford it go the university in the city of Oaxaca an hour and a half away. Many do not come back as it is easier to find good jobs in the capital then in the pueblo. Some of those who remain go into farming, but the majority seek less demanding jobs that pay more for easier work. 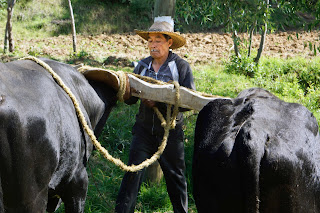 Teodoro told me that a team of oxen costs about 40,000 pesos ($2000 US), a lot of money for a farmer in Mexico. First you have to train them, which is not an easy task. It takes about a year to train a team, and if you pay someone else to do it, that is another 20,000 pesos. So Teodoro trains them himself. A team lasts three to four years. "Once a team is trained they can do the work by themselves", he explained. "You have to handle the plough but they know where to go, when to stop, when to turn around". But it is hard work to get them to that point. Oxen are enormous creatures and do not like having a yolk put on them so they can pull a heavy plough through the hardened earth.  You need to know how to handle them or you can get hurt badly. 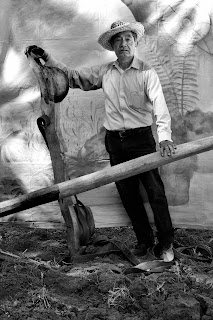 I wanted to get a portrait of Teodoro with my backdrop and he proposed doing it out in his field where his plough and yoke were. We jumped in his pickup and drove the mile or so to where his terreno was. The landscape is very steep and hilly and the soil broken up and hard to walk on. I dragged my backdrop down a steep hill and Teodoro went and got his yoke and his plough. This is where he wanted to have his portrait taken. This is where he belongs, with his head held high and the earth beneath his feet.