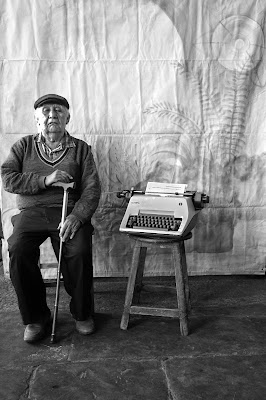 Carlos Ramiro Lopéz is a public scribe. For nearly sixty years he has been using his typewriter to help people express themselves through the written word. It is what has given meaning to his life and allowed him to eke out a meager living.

When I first saw Don Carlos in his booth in Oaxaca's Benito Juarez Market in 2015, I knew I had to photograph him. His oficio (occupation) was one that most certainly was on its way to extinction. When I asked his permission to photograph him and include him in my project I received and abrupt and unequivocal NO! It took me four more years to be granted that permission. 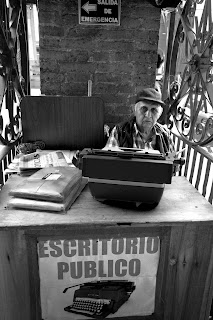 In the early 1960s, Don Carlos set up shop in the portals of La Plaza Santo Domingo in Mexico City. He joined a group of about fifty other typists who filled the air with the click-clacking of words being put on paper. His was a valued profession in those days. But there were dangers as well. Scribes were frequently asked to forge or alter official documents, actions that carried with them steep fines and imprisonment. In 1985 he decided to leave Mexico City and move to Oaxaca. He has been there ever since.

In the 1980s there was a demand for Don Carlos' work. There were politicians who came to him to type up official documents, migrants from the countryside who needed someone to pen a letter home to their families, and there were love letters to be written. Those times began to disappear with the advent of computers and were given a death blow by the arrival of the cell phone. People no longer had the same need for someone to help them compose and write their letters. Their phones had autocorrect and texting became the norm. The ritual of putting a letter in a stamped envelope and taking it to the post office was disappearing  along with Carlos' profession. His work was now comprised more of typing bureaucratic forms in triplicate. 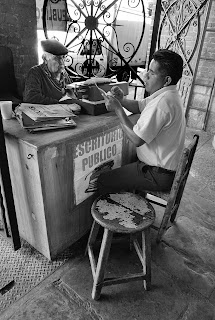 In March 2019 I carried my backdrop to Benito Juarez Market to do the portrait of Don Carlos. This time he was ready and willing for the photograph. We had had time to form a relationship and I think he knew, that at eighty, his days as a scribe were nearing an end. Shortly afterward the pandemic hit Oaxaca, I left for Oregon, and after I left, Don Carlos decided to close up shop and not risk what otherwise might be awaiting him. When I came back in January of 2022, He was longer in his booth in the market. A market vendor told me he was still alive but no longer came out much due to the virus. His small wrought iron booth was locked up and would not reopen. This is the first of the oficios in my project that I have witnessed die out. However, I fear that it will not be the last.

A wonderful story, Deek! Progress is wonderful, and unfortunate.

Great profession, lots of stories there. Shame nobody writes letters anymore. I've kept loads from years ago - including some from Marie (just about deciphering them!)