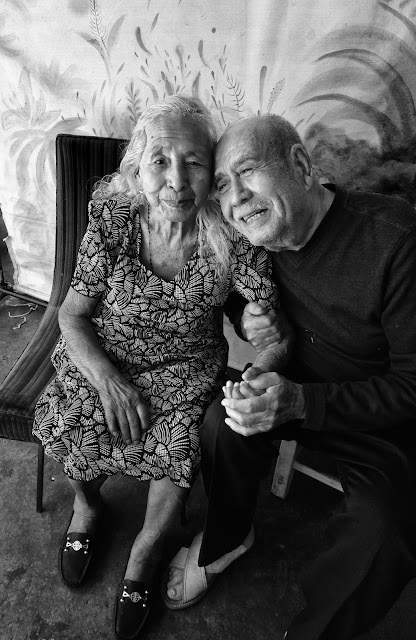 I had been looking for a huarachero (sandalmaker) for some time before I was directed to the home of Israel Rojas Rojas in the barrio de la Merced in Oaxaca Centro. I was looking for someone who was a maestro (master artisan), but there were fewer and fewer to be found. There was no sign announcing his workshop and I had to ask around the neighborhood quite a bit before I found a door to knock on. When I did, a young man opened the door and informed that indeed this was the home of a huarachero, but that he had stopped working a couple of months earlier due to age. We talked for a while and he invited me and called his father, Israel.

When I explained what I was doing, Israel perked up and became excited that I was interested in his life work. We talked for quite a while and he proposed to work for a while so that I could photograph him. I gladly accepted. His grandson, Ivan, had taken over most of the work when his grandfather decided to step back. But Israel was proud of the what he had done with his life. He started working as an apprentice when he was eleven. He learned by doing, and at eighty-eight, he had become a master. He had taken on several young people as helpers who could learn the trade, but none had the commitment and determination to stay with it to the end. When I asked Israel why, he told me that “ser huarachero es una vida muy triste, muy pobre” (it is a very sad and poor life). He also said that the hides used to make the huaraches often had a very unpleasant odor. It was enough to drive many away from the trade. The materials had also gotten very expensive and if you hired an assistant to help in production, your profit was nearly gone. Israel sadly believes that his is a dying occupation. It is not what it once was when there were hundreds of huaracheros in Oaxaca. 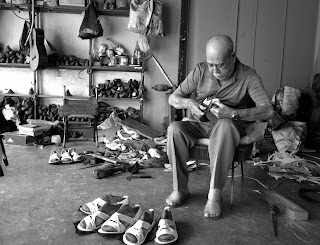 Israel managed to earn a fair living as a huarachero because he was able to work fast and not sacrifice quality in doing so. At his peak, Israel’s son and daughter worked with him and he took his product to Mexico City to sell. At one point in the 1960s, Israel could earn 250 pesos in Mexico City compared with 8 pesos in Oaxaca. Huaraches were very popular and many were being exported to the States as they were in vogue. But when the demand dropped off, so did the sales. Selling in the markets also meant that others could steal your designs; and they did. It is a hard way to earn a living.

At eighty-eight, Israel no longer has the strength in his arms to work the leather as he once did. His grandson, Ivan, has taken over and makes a meager living doing so only because he does the making and the selling by himself without hiring help.

Israel’s huaraches are high quality and well made. But what impressed me perhaps more than his leatherwork was his love of life and his joyful love for his wife, who he calls his pollita (little chick). When she came out in the courtyard once we were done photographing, his eyes lit up and a huge smile spread across his face. I offered to do a portrait of the two of them and he was thrilled. There was no question that she was the love of his life. And it was obvious that she felt the same way. If Israel put as much love into making a pair of huaraches as he does in caring for his wife, no wonder he did such superb work!