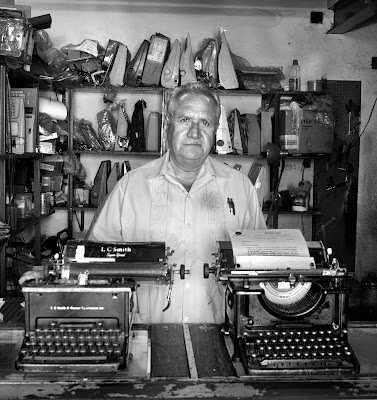 I love working on a typewriter - the rhythm, the sound. It is like playing the piano, which I do too.      David Mamet: Playwright 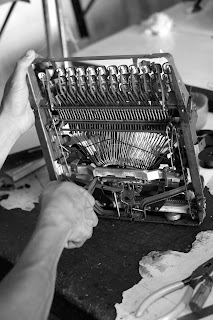 I had walked past Gabriel's Oficentro shop in Oaxaca many times before curiosity got the best of me and I stopped. It was a tiny space filled with old manual typewriters. Gabriel was seated at the front counter fixing something. He is a "fixer" by trade, with manual typewriters being one of his specialities. My Oficios project (occupations) is focused on jobs in Oaxaca that are in danger of dying out. I have photographed and interviewed many craftspeople and artisans as part of my project and all were practicing a profession that was a part of Oaxaca's traditional culture. I had not approached Gabriel earlier as I did not see his job as falling under the category of "traditional". But I could not help wondering: "how can a person earn a livelihood repairing and renovating old manual typewriters"? So I stopped to find out.Gabriel has been at his location on Fiallo in the Centro Historico of Oaxaca for over thirty-seven years. In 1986 he found himself without work and joined his father-in-law in his small machine repair shop. He started doing the paperwork and clerical work and ended up doing what he liked best: repairing machines. After one year, he started his own shop with a friend who was unemployed at the time. He has been repairing typewriters, calculators and other small technological devices ever since. Most of them are typewriters, Hermes, Olivetti, Smith Corona to name a few that line his "to be repaired" shelves. "There used to be over forty shops like mine in Oaxaca, but the arrival of the computer drove most people out of business. Now if there are three shops like mine, that is a lot". He has one young employee, Javier, who has learned the trade well. Gabriel told me that on an average week, he receives about thirty typewriters to repair. What he likes best about his work is seeing peoples reactions when they come back to get the old, beat up typewriter they had brought in. It looks like new and it works perfectly! He still has lots of people passing by stop to tell him that the old typewriter that he repaired for them many years ago was still working perfectly. All of his repairs come with a one year warranty and the electric ones get one year free maintenance as well! 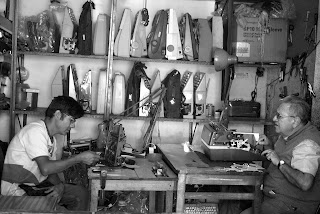 There is no question that modern technology has put a serious dent in his business. But there are still the chosen few who love their typewriters and will never give them up. Gabriel said he felt his role had become one of preserving antiquity, keeping old ways alive. However, at age sixty-four, he has no one in his family interested in taking over his business when he retires. Like so many that I have interviewed, the chances of his business surviving when he is gone are slim. He is a dying bred.

Since Gabriel's shop is only three blocks away from my apartment in Oaxaca, I stopped by often to say hello. We became friends. He still communicates with me while I am here in Oregon, He does not send a crisply typed letter by mail, but rather texts me on WhatsApp using his cell phone. I have no doubt that if that goes on the blink, he can repair that too. That is what "fixers" do. 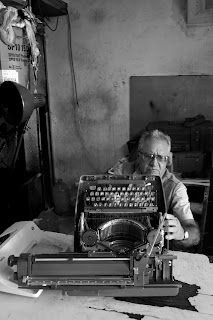 Great story. Thanks! I’m enjoying your blog, so glad I discovered it. Will help me be in Oaxaca when I’m not. I’m also a retired French teacher and Francophile.