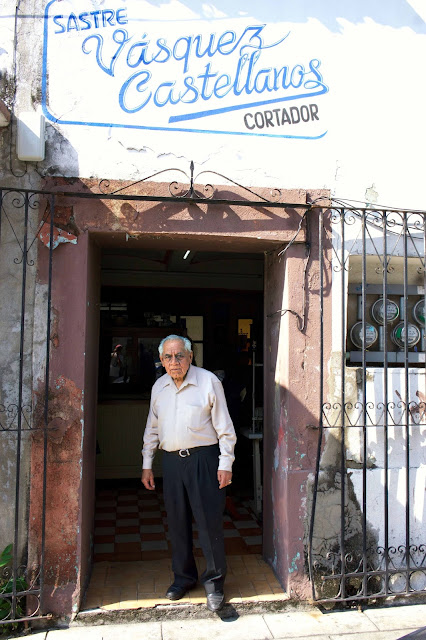 Manuel Vasquez Castellanos is a sastre cortador (tailor/cutter). He spends ten to twelve hours a day in his small taller, (workshop) on Calle Quetzacoatl in the Centro Historico de Oaxaca. Although his taller is not his declared residence, he has a bed in the back and spends many a night curled up after a long day of work. "I like my taller; tailoring has been my life since I was a kid," he explained to me. "I come in each day around ten after breakfast, and call it a day around nine or ten at night". 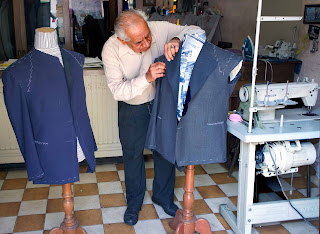 Although he still works hard, not all of those hours are spent working. Many are spent reminiscing of the "old days". He speaks of the best sastres in Oaxaca in the 1960's like a baseball fan speaks of hall of famers. They did quality work in a time when hand sewn garments were still in fashion and worn with frequency. "Now, " he claimed, "there are not many people who wear hand tailored suits. It is much cheaper to buy them off the rack and price has over-ridden the importance of quality and a good fit". 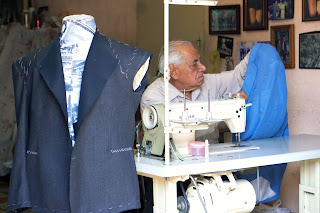 Manuel is both a tailor and a cutter. He explained the difference this way:, "Cutter and tailors are responsible for taking a flat piece of cloth and turning it into a three dimensional object (a suit). A cutter's role in this process is to fit the garment perfectly to the client's figure, and that is the skill that truly differentiates their role".
Manuel  started an apprenticeship in tailoring in 1953 at age seventeen in Mexico City. He came back to Oaxaca in 1960 and opened a shop with some friends. "It was the epoch of hippies and bellbottom pants", he told me. If you wanted to survive, you had to follow the fashions and make what the client wanted. He started working on making pants because they were easier. Jackets were the most difficult and came toward the end of the apprenticeship. He mastered all the stages of his apprenticeship and went on to become a cutter in addition to a tailor. He has clients both rich and prestigious and humble with meager incomes. "As my father taught me, we are all the same".   In 1980 he was invited to teach tailoring at the Escuela Municipal de Sastreria, a local trade school that was opened that year. He no longer teaches at that school, but two of his former students, both women, are now in line to take over his business when is is gone. He told me that nowadays there are more female tailors than men. 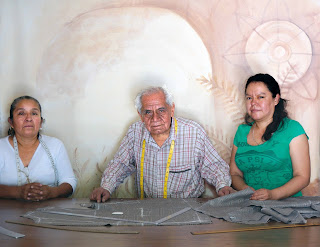 Manuel is now eighty years old, and his is a dying profession. "Conmigo termina la tradición (the family tradition ends with me). His children all have jobs as professionals and have no desire to continue in his footsteps. Most youth do not want to enter the profession as it takes much time to learn to do it well and it is hard to make a living as a tailor. He is happy that he has two ex-students interested in carrying on his work. "It is important to share what you know so that your art form does not die out. It is now time for the younger generation to take over.".
So they come regularly to learn from "el maestro" (the master), and he tells me he also learns from them.
He is proud of what he has done with his life and is happy that teaching has allowed him to share his skills with others.
Despite the fact that demand for his services has declined, Manuel has not changed his daily routine; he arrives after breakfast and quits around nine or ten in the evening, and he still spends many a night in the bed in the back of his small workshop. There is still a need for clothing for people whose body shapes do not fit into the norm, people who cannot find clothes off the rack that fit them. And there are the people who attend the weekly Danzon events in the zocalo who need the period clothing that goes back to the 1930's and the Pachugo look of the zoot suiters. Outside of Manuel, there are very few tailors who remember this style. 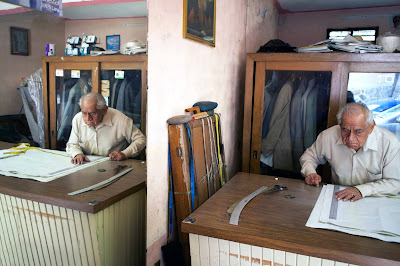 When I walk by his taller on Quetzacoatl Street, I invariably find Manuel there, either leaning on his sewing machine catnapping, or at his work table preparing a precision cut for some lucky client in need of a perfectly fitted jacket. His life is encapsulated in the small workshop of Sastreria Vazquez Castellanos. There are photos, diplomas and certificates of appreciation that define who he is. Each one has a story behind it that he is glad to tell. And this is why he spends so much time in that small  taller: It is his life, a tailor-made life that he will always treasure.