Doña Queta: A Life Built upon Service and Respect

“My name is Enriqueta Contreras Contreras. I am a curandera (healer) and a midwife. I am Zapoteca and I speak my native tongue”. (Doña Queta: Video interview 2019)

I first met Doña Queta in 2018 while working on my oficios (occupations) project. Midwives and curanderas are such an important part of the culture of Oaxaca, that my project would not be complete without one. As luck would have it, I was introduced to an American woman that was working on a midwifery project that included Doña Queta. She told me that Doña Queta had become very leery of doing interviews or being photographed as she had had some bad experience with people who were trying to use her for their own benefit. She told me she would make the contact for me and explain my project and its purpose and get back to me. A few days later I got a message that informed me that Doña Queta was willing to meet with me. There was no quarantee it would go any further, but she was willing to meet to hear more about my project. 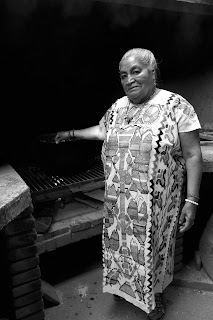 The meeting went very well. There was an immediate click between us and she agreed to let me come photograph her and do an interview. She told me that she can tell much about a person and their intent when they walk through the door. Her intuition told her that I was respectful and that she could trust me. Over the course of the next year I went to see Doña Queta several times. She was always warm and welcoming. There is a sense of pride in her bearing that has been hard earned over her eighty plus years on the planet. Her journey to success and acceptance has never been an easy one. This is part of her story:

Enriqueta Contreras Conteras was born in the indigenous pueblo of Benito Juarez in the Sierra Norte of Oaxaca, an hour and a half outside the city. Her father died when she was three years old. She had several siblings and the family was very poor, so at the age six she was given to another family in the community who did not have children. They sent her into the countryside to care for their sheep and goats. The couple drank heavily and when they did, they did not feed Doña Queta. She survived by teaching herself about the plants that grew in the wilderness. Her grandmother was a curandera and partera (healer and midwife) that lived to be 115 years old. She believes that her gift for healing was inherited from her grandmother. Doña Queta had seen her grandmother assist at births on several occasions, and had seen her prepare herbal remedies many times. But she was self-taught from the age of six. She had an intuitive sense about nature and medicine. She never went to school and did not learn to read and write until much later in her life. Her intelligence was a natural one; she claims that Nature herself showed her how to care for the things in nature.

In time, she began working at health centers in the local indigenous communities. She was very popular among the people because of the way she treated them, both medicinally and humanly. All that she did was based on respeto (mutual respect) and respect for nature. But because she did not hold any formal diplomas for what she did, and jealousy caused by her popularity with the patients, she was often not accepted by other health workers, and was asked to leave more than one community because of that. She was committed to being of service to her people and never gave up her journey. 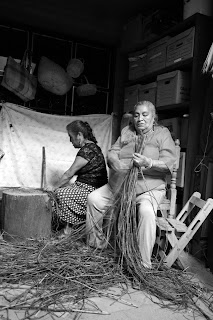 She makes all of her own herbal remedies with plants and flowers from the Sierra Juarez, where she grew up. She is extremely knowledgable and very meticulous in their preparation. She has a temascal (sweat lodge) that she uses as part of her midwifery, and a room where she works that is full of her remedies and tinctures.

Over the course of years, Doña Queta has become bi-literate, taken some first aid courses from the Mexican Red Cross, and found a following among midwives in the United States and Canada. She now gives workshops in Mexico for local midwives and visitors from abroad, and has traveled to other parts of Latin America and North America to give workshops.

"Healing is a great responsibility, it is no game. You have to move a lot of energy, physical, emotional and spiritual". She is a master at doing that. She has made me a tincture to strengthen and protect lung, counseled some dear friends after the loss of a loved one, and offered her services without charge to those in the community that could not pay. 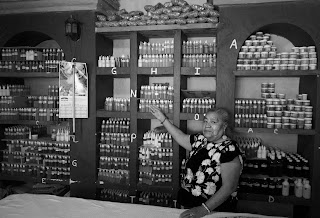 Her work in the community was finally recognized nationally when she was awarded a certificate of appreciation for her work in women's rights in Mexico. Her daughter, Norma, is following in her footsteps and will be in line to take over the practice when Doña Queta is no longer able.

The message that she continually reiterated to me was this: We  have to respect each other, if not, no healing can take place". I have nothing but the utmost respect for Doña Queta, and I am honored that she invited me into her life.

Oh brilliant, Dick. So heartwarming; and so galling the life that some people have led, in childhood especially. We don't know the half of it ! I can quite see why she'd have welcomed you in immediately - you're so obviously a good person.
Stay safe.
Carmel

Thank you so much for this article. Is there any website regarding her services and how we can meet up with her? Thank you!