Pelota Mixteca: A Game of the Gods 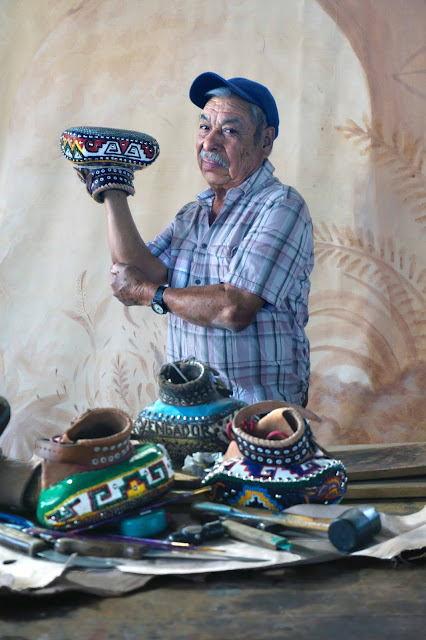 Alberto Pachego Santos lives in Ejutla, Oaxaca, and is a master glove maker. He specializes in making and repairing guantes de pelota Mixteca, eleven-pound gloves worn to play the ancient ball game from Pre-Columbian times. The gloves are made from layers of rawhide and tanned leather with over three kilos of round -headed nails pounded into the face of the glove. It is this part of the glove that strikes a two -pound compressed, rubber ball. The nails are an essential element in the glove-making process and are now extremely difficult to find. So Alberto no longer makes new gloves and dedicates himself to repairing old gloves that the players bring him. Alberto has been practicing his trade for over seventy-four years. He began working at his father’s side at age six. His father had learned the trade from his father. There are only two people in Oaxaca that make the gloves, Alberto and his uncle, Augustín who is ninety and making very few gloves now. Augustín is still able to make new gloves as he has a remaining stock of round-headed nails.

Alberto takes great pride in the craft he does. He truly loves the game, having played for thirty-five years before he fell and fractured his arm. He can no longer bear the weight of the glove due to that injury. But he claims that you had to be a player to understand the mechanics of the glove. Each player’s glove is custom made, depending on the position of the player, his size, and the way he strikes the ball. In order to repair a glove, Alberto must take the entire glove apart and redo it. It takes him a week to two weeks of full time work to complete the job, depending on the size of the glove. The total cost for the repair is around 4000 pesos ($200US). That is a lot of money in Oaxaca, but viewed as money well spent if you play Pelota Mixteca. 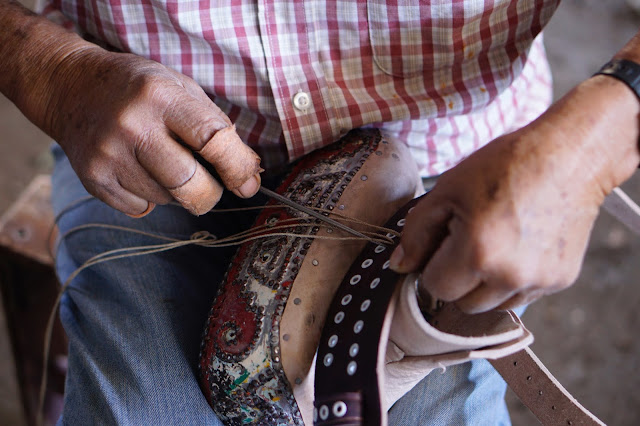 The entire reconstruction of the glove is done by hand, from the cutting of the leather to the sewing together of the multiple, thick layers. It requires much patience and diligence to do the quality of work that Alberto insists on doing. He works from early morning to nightfall daily, taking breaks to rest, tend his garden and prepare his meals. He loves his work; it is his life. He is concerned who will take over his craft when he is gone. At eighty, he is still alert and in good health, but there is no one apprenticing with him. It takes much time to learn all the stages of glove-making and repairing, and it's hard, physical work. Young people today can find an occupation that is easier and pays better thanks to technology. But it does not bring the satisfaction of playing an integral part of a game that has much importance in the Zapotec communities of Oaxaca. Alberto would think of doing nothing else but repairing gauntes Mixtecas. 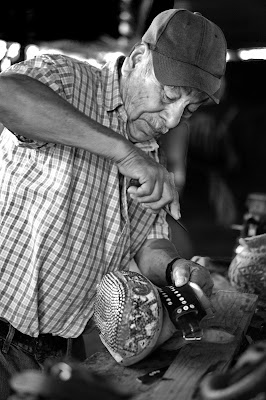