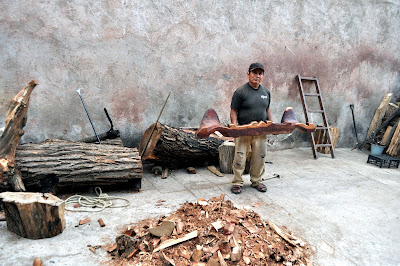 Arnulfo Morales Hernandez is a yoke maker. He is the only remaining craftsman in San Bartolomé Quialana that makes wooden yokes for the teams of Brahma bulls that plow the steep hillsides surrounding the pueblo. He also makes the wooden plows that turn over the earth for planting corn during the rainy season from May to September. The rugged terrain makes plowing with a tractor difficult and dangerous. Nearly everyone in San Bartolemé continues to work the land in the traditional manner: with a team of Cebú and wooden plows (arados).

Arnulfo has been making yokes and arados for twenty-five years. He learned by watching some of the older men in the pueblo (now retired) and then taught himself. It takes him two to three days to make a yoke, depending on the size. They are made from different types of hard wood and last up to twenty years. A larger yoke sells for 1500 pesos ($75 US). The wood costs Arnulfo 500 pesos, leaving a net profit of 1000 pesos ($50 US).

The smaller yokes are used for training young Cebú to work the land. Arnulfo explained that it is much like breaking a horse. The Cebú are strong animals and put up much resistance to having the yokes put on them. Much care must be used in harnessing them as they can get very angry and react wildly, endangering the person trying to train them. However once they are trained, they are very easy to work with. “Ya, uno no va adelante, ellos van solos” (Then you don't have to lead them anymore; they go by themselves). The campesino guides the plow and the Cebú do the rest. Each animal has a name that they recognize. If for some reason they stop plowing, all you have to do is call their name and they start working again. They know their job well.

Arnulfo does not think his trade is in danger of dying out in the near future. People in San Bartolomé respect the traditional ways of doing things, and tractors are not of much use due to the terrain. His son-in-law is working with him now and perhaps will decide to stay in the yoke business. “It is honest work that brings food to the table”, he told me. There are few schools nearby by, and for those who do well in school, there are more options for employment. Those who do not fare well in school work the land.

When I asked Arnulfo what he liked most about his job, he answered: “Me encanta mi trabjajo. Cada persona nace con algo, y yo nací para hacer yugos y arados. Uno necesita amar lo que hace para ser feliz”. (I love my work. Everyone is born with a gift, and I was born to make yokes and plows. You need to love what you do in order to be happy).

Arnulfo’s life style is quite self-sustaining. He owns his house and the land he farms. The demand for yokes and plows is consistent and he usually has sufficient work. His wife makes tejate, a natural drink made from cacao, to sell in the market and also embroiders huilpiles. His daughter is a flower vendor. Working together they make an honest living and are able to remain in the place they call home. And in doing so, they maintain the traditions of their ancestors and a simplicity of life that is a true accomplishment in this day and age.