One Man's Grain of Sand 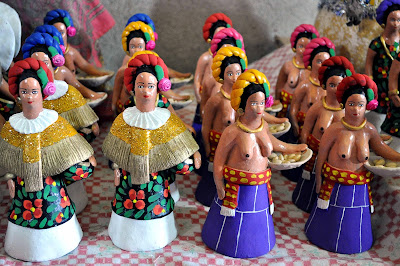 As a young boy, Martin Valdéz Toledo watched his grandfather shaping clay into traditional Zapotec dolls called Tangú Yús. They were handcrafted and colorfully painted and many people had one in their home. When Martín's grandfather died, no one stepped into his shoes. It wasn't until many years later that Martín decided to fill them. He had worked several different jobs to provide for his family until one day he remembered the Tangú ¥ús. He made several and his wife took them to the local market in Juchitán. She sold them easily that day and so began a craft that Martín has been practicing for over twenty-two years. He is one of only two people in the entire region of el Istmo of Oaxaca to do this work. He starts at 6 am every day and works until 4 pm. His hands are precision machines, shaping the local clay into dolls that  are "almost" identical". Yet each one has the noticeable difference of a handmade piece of art. 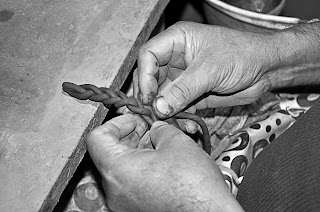 Martín explained that centuries ago when the Zapotec people of Oaxaca's Central Valley migrated to the Istmo, they brought their clay gods and goddesses from Mitla with them. On of the most revered was the goddess of el Nuevo Amanecer (Dawn). It was believed that she ushered in the sun each morning. Another was the bare-breasted goddess who was the patron of healthy births. And there were many more, most of which are forgotten now. Most people don't remember the importance of the Tangú Yú. 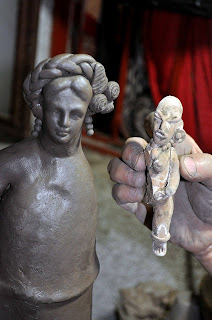 When I asked him what he liked best about his work he replied, "Two things. First, it provides a way for me to make a living , and second, this is an important part of my culture. It is a small grain of sand that I carry so that our culture will not disappear".He still goes with an ox drawn cart to get his clay. And ironically he often finds small Zapotec figures buried in the loads he brings back. 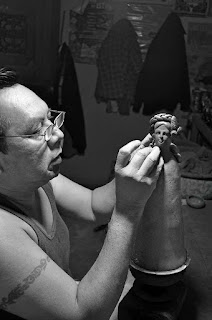 Martín takes great pride in the work he does. "This is the talent that God gave me", he told me. "There are no molds used, "puro mano" (only hands). The repetitive nature of the work has taken a toll on his body. His back aches from sitting all day and his hands and arms suffer as well. His two daughters paint the Tangú Yús, but they are studying professional careers and will not take over for Martin when he is no longer able to do his craft. The authorities do not promote the native crafts, and modern machines can now produce copies of the hand work for a much lower price. People are not willing to pay for the quality of workmanship. Unfortunately, his craft seems destined to die out.

But in the meantime, Martín continues to carry his small grain of Zapotec sand, and his sales still provides a modest living for him and his family. And most importantly, it keeps the rich culture of the Zapotec people of el Istmo authentic and honorable.