Apolinar Aguilar Velasco: A Cut Above the Rest


Apolinar Aguilar Velaquez is a bladesmith (cuchillero artistico). For over forty-seven years he has been, forging, hammering, and grinding steel into precision handmade knives, machetes, and swords. In that time, he has become a master of his art form.

The Spanish Dominican friars brought the art of bladesmithing to Ocotlán in the sixteenth century. At one time there were over one hundred fifty knife makers in Ocotlán. Today there are approximately forty-five. Apolinar’s workshop is one of the more successful. But that was not always the case.

At the age of ten, he and two older brothers, eighteen and twenty years old, decided to open a workshop in Ocotlán, Oaxaca. Apolinar’s uncle Ricardo, who died at the age of 110, taught them the art of knifemaking. The three brothers struggled to earn a living bladesmithing. They had to make their own tools and bought recycled metals such as pistons and shock absorbers from mechanics to melt down to make the knives and swords. It took them over twenty years to earn a decent living through their art form. 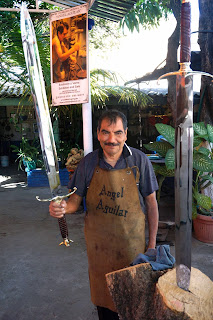 In 1983 Apolinar and his brothers went to Wimberley, Texas to see if they could fare better there. They were able to build a small workshop on an empty lot and caught the attention of the locals. The locals, impressed by the quality of their work, invited them to an artisan fair, and from then on their business began to prosper. It was during this time that one of Apolinar’s swords was chosen to be used in the film, “Conan the Barbarian”. Next they were invited to participate in an international metal craft competition and were awarded fifth place. This gave them the experience and confidence to return to Ocotlán, the pueblo they loved, and start anew.

When the brothers returned home two years later, their business took a turn for the better. They were discovered by a prominent martial arts teacher who began to promote their work. They decided to keep their bladesmithing one hundred percent traditional and to circumvent middlemen, selling their works directly to townspeople and tourists. 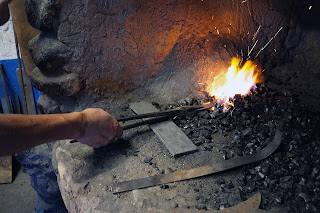 Apolinar built his own bellows from a wooden box and pieces of leather, and fired his primitive forge with pine charcoal, which can burn at temperatures up to 4000 degrees Celsius, an ideal temperature for forging metal. The only electrical powered tool he uses is a grindstone for sharpening his knives and swords. When asked why he doesn’t modernize his equipment, he answers that that would take the art out of his work. He is bound to tradition and the quality of product that it renders. His techniques of bladesmithing have changed very little since the sixteenth century. Even the handles for his knives and swords are made from natural materials: tropical woods, animal horns and antlers, bones, snake and iguana skins and any other natural material that a client requests. 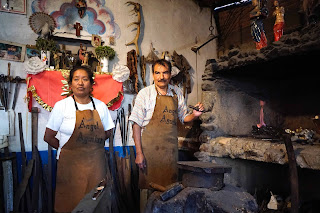 Apolinar’s brothers are now deceased and he works in partnership with his daughter. They still use the name Taller Angel Aguilar as the name for their workshop in honor of Apolinar's older brother. They have perfected the technique of demonstrating their art form; the amazing display of their finished works highlight their superior craftsmanship, and one feels honored to leave the workshop with one of their knives. 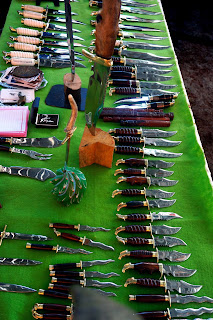 Besides producing the highest quality of knives and swords, Apolinar and his family have forged a way of life that brings them pride and satisfaction in the work they do. They are maintaining an ancient tradition out of love for their art form, and in doing so, they have established themselves “a cut above the rest”.

I had the great pleasure of meeting both brothers in Ocotlan in 1988 and had them make me 6 custom swords, including a katana, and many knives and broadswords. They even made kitchen knives for me. I treasure these, as their work was so great. We sat and drank tequila one night after my works were done and enjoyed dinner together. Something that I will always remember. True craftsmen!

Anyone know where their workshop is located?