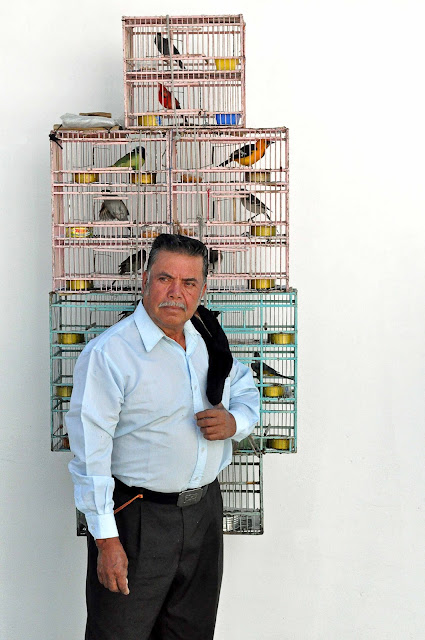 Carlos Flores is a pajarero. For fifty years he has been an ambulant bird vendor, wandering the streets of Oaxaca with his cages of colorful birds strapped to his back. He is one of a handful of men in Mexico who still earn their living in this way.
When he was fifteen, a cousin in Mexico City invited him to join him in selling birds on the streets. Since Don Carlos did not have a job at the time he accepted. “I didn’t know anything about birds”, he told me. “I had to learn everything, what kind of bird they were, what they ate, how to care for them, and how to sell them to people”. Carlos’ cousin and other bird vendors took him under their wing and taught him all he needed to know. In a matter of weeks he was selling on his own and generating a small income. Today a good month sales brings him 6000 to 8000 pesos ($330-$440). From that subtract the expenditures for the purchase of the birds, travel to get them, and their food and medicines. It does not leave much as profit. 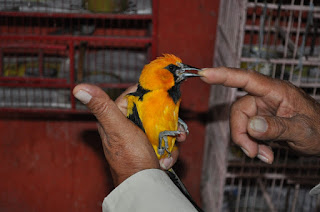 Many things have changed since the time Carlos started selling. Many birds are now protected due to their dwindling numbers. The Secretary of the Environment and Natural Resources monitors bird vendors. Carlos has a permit that must be renewed yearly, and there are stiff fines for capturing and selling protected birds. Carlos travels throughout Mexico to purchase his birds. He transports them in the luggage compartment of buses and can only travel at night when it is cool and safe for the birds. 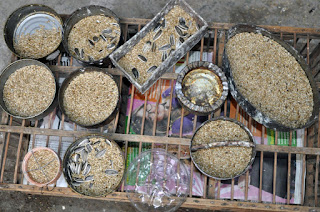 I visited Carlos one morning to watch him at feeding time. He mixes banana, hard-boiled eggs, seeds, and a special blend of flours for their breakfasts. He has learned to detect illnesses in his birds and how to treat them. What brings him joy is to pass houses of customers and hear their birds singing and bringing happiness to the house. It also makes him happy to know they are being well cared for. 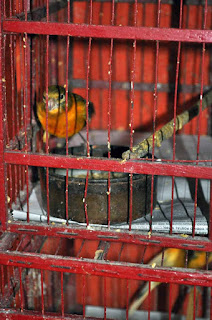 Carlos’ oficio (occupation) is in danger of extinction. At one time bird vendors were a common sight in the streets of Mexico. Many people had homes with large patios and terraces and singing birds made them an agreeable space. Now many people live in apartments and don’t have room for birds. There are also environmental and animal rights concerns that were not as common as they are today.


Once a year he goes to a pajarero procession in San Luis Potosi attended by 150-200 vendors carrying their cages to the Basilica de Nuestra Virgen de Guadalupe to be blessed. That number will most likely continue to dwindle as vendors get too old to carry the cages anymore and there is no one interested in taking their place. Like many professions, it will eventually die out. But for Carlos, it is his way of earning a living. And in doing so, he can still bring the joyous sound of singing birds into homes and lives of many and keep an ancient tradition alive.

PS
This post does not condone the caging and selling of birds. It is an objective documentation of a profession that still exists in Mexico.
Posted by Dick Keis at 8:54 AM