Year of the Maya

It has been a while since my last post, and since then we have entered into the year of the Maya. Some of you may be preparing for the worst based on the ancient Mayan calendar. Earthquakes, tsunamis, floods, volcanic activity, the signs appear to be pointing in that direction. So I start this posting as a messenger of hope: http://en.wikipedia.org/wiki/2012_phenomenon. (Click link). Voila!

However, having touched upon the topic of doom, I do have some sad news to report. In one of earlier blogs, I had photos of my two Mexican guard turkeys, Hortensia y Enrique. When we came back from our trip to the coast. the familiar gobble gobble of my friends was not to be heard. The next day I found Hortensia roaming aimlessly about the yard. Much to my chagrin, I found that Enrique had become Christmas Eve mole! Hortensia was in quite a state for several days. It appears that she is also "Moving On" and has taken up with one of the ducks in the yard. Somehow that just doesn't seem right!

The time since my last post has been happily filled with visitors. Quena arrived first, so we took a short trip to Cuetzalan, a small colonial city in the Sierra Norte de Puebla. We spent as much time in the bus as we did in Cuetzalan, but it was worth the long winding journey. We went to some relatively little visited ruins in Yohualichen, a half an hour pick up ride from Cuetzalan. The structures are very similar to those found in El Tajin in Vera Cruz, only smaller and much less visited.

The day that we arrived, we were the only ones there for quite a while. The fog was dense at times, and I expected to see ancient Totonaco figures running about on the ball court, but no such luck. I did see young totonacos running through the village though. It was a magical morning with the fog enveloping the stones.
I sketched a bit and wrote the following: Silence settles on ancient stones, torres de voladores rise skyward so peaceful and calm. Nahuatl, totonaco, war and conquest, but the same stones used over and over in "la casa de noche" (meaning of the name Yohualichen).

Joa arrived on December 23rd, and we all met up in Mexico City (DF) before flying to the Oaxaca coast on the 24th. Needless to say, DF was a scene, crowds moving like serpents across the zocalo, vendors of all sorts peddling their wares, Edward Scissorhands and Sponge Bob impersonators performing for throngs of Mexican families. There was even a group playing Breton music, another sign that the three of us were not alone on our journey of remembrance!


We arrived in Puerto Angel on the afternoon of December 24th and checked into Casa Arnel, a small five room hotel run by a fisherman and his wife. They invited us for Christmas Eve dinner, a very nice way to start our stay. A few days later we moved to a room in another fisherman's home, a man that Marie, Quena, and I had met fifteen years earlier. Marie and I were interested in a story for kids about natural dyes, and the Oaxaca coast was home to the caracol purpura, a shell that I will talk about a bit later. It was a reunion of sorts, even though Quena and Magda were now 25 year old women and not ten year olds anymore.
They were good people and we had a good time together.

Puerto Angel is a very tranquilo fishing village that had not changed much at all since we were there fifteen years ago. The beach is dedicated to fishing for the most part, and although the beaches were not as good as some others in the area, it was free of foreigners and much to our liking. The only drawback was the line of people on the beach clustering close to shore because they could not swim. Getting out into open water was a bit of a water ballet, weaving through kids and adults with life vests on or laying atop large inflatable turtles holding on for dear life. 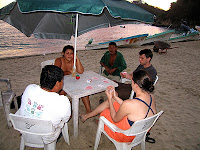 It was also a fish-eaters paradise. The boats would return in the morning or later afternoon and the catch of the day was unloaded and bought by buyers right away. Some of the buyers were owners of small beach front restaurants who had the fish, mostly dorado, on your plate two hours later, perfectly cooked accompanied by a nice cold Negra Modelo! It was a meal that even the most sophisticated of  diners could not devour with dignity! Sometimes you just have to allow yourself to indulge in the better things in life. However, it is best if your son doesn't take photos of the event.

Much of our time on the beach was spent in the water, sipping cold beers or coconut water in the shade, and playing a card game called 22. Since this is my blog, I can claim to have been the overall winner of the tourney, showing little mercy to my children now that they are adults.

Back to the caracol purpura. Marie and I had hoped to do a book about natural dyes used in weavings, (cochinilla and caracol purpura). I am still considering doing it. Alonso, and his brother Catarino, both know how to get dye from the caracol (snail). I went out with Catarino to photograph how it is done. It is quite a long, laborious process. It requires going out onto the rocks, finding the shells, tapping the fluid inside onto the skein of cotton or wool, and replacing the snail on the rocks where it replenishes itself for future use. Catarino's wife weaves with the dyed cotton (backstrap) and sells it in markets.

In the past, people from Pinotepa de Don Luis, a town in the mountains five hours away by bus, would walk to Puerto Angel carrying their food, water, and cotton, to dye it and then return home to weave. Unfortunately, the caracol purpura is disappearing due to indiscriminate gathering of shellfish. ¡Qué pena!

We ended our Oaxaca stay in the city of Oaxaca. What a wonderful place, so full of culture and color. If I return to Mexico next fall, I think I will spend a good amount of my time in Oaxaca. Most of Marie's Mexican sketchbooks are from Oaxaca, and I am determined to do her book soon. Without question, Oaxaca would be an inspiring place to begin. 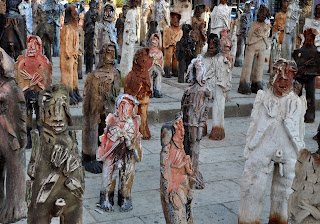 While we were there, they were setting up an installation of sculptures entitled, Migración. It consists of 2502 clay sculptures, 650 of which were already installed and 1850 still to come. quite an amazing installation, right in the heart of the historic center of Oaxaca, near Santo Domingo.
I will close this post with a photo taken on January 9th, Marie's departure anniversary. Not only did she arrange to have this date be full moon, but she arranged to have the moon aligned directly in an opening in the facade of La Capilla Real in San Pedro. She indeed has her ways of showing her presence!
May 2012 be the beginning of a new era for all of us, full of peace and hope. Hasta pronto,  Deek

Wonderful post....although you lie about the 22 victories. I can't believe you ate a whole Marlin...

Thanks Richard for keeping us all posted on your adventures. Your thoughtfulness is much appreciated. xo nj