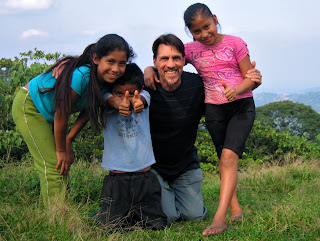 Mexico offers endless opportunities for one to partake in the diversity of its rich culture. Since my last post, I have participated in a forum on intercultural education and migration, la fiesta del pueblo de San Andrés, a cultural performance of indigenous children, and the International Jazz Festival in Puebla. 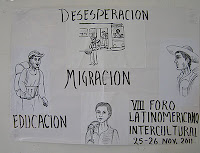 The VIII Foro Latinoamericano de educación intercultural, migración y vida escolar (Latin Amercan Forum on Intercultural Education, Migration, and School Life) took place in late November in Cuetzalan, a pueblo in Puebla's Sierra Norte, which is deeply affected by migration due to lack of work opportunities. Most of the population is Nahuatl or Totonaco, and leave their pueblos to look for work in Mexico City or Puebla. It often has a devastating effect on families, children with a fragmented educational experience and parents without the family and cultural support system that they have at home. A very unfortunate effect of globalization and international trade agreements. Economic crises hit Mexico very hard. As a woman told me yesterday, when the United States gets a cold, Mexico gets pneumonia. As a result, people are forced to leave their communities to survive.

One of the highlights of this trip was visiting the pueblo of Ayotzinapan, a half hour outside of Cuetzalan. My friend, Jorge, has been involved in a project with the community there to build and stock a library. The driving force is a group of young people between ten and twenty years old, who have thus far completed the building of the library and obtained some, but far from enough, books.
In the near future, I will be sending information on how anyone interested can help them fulfill their dream.

The fiesta de San Andrés was a three day event celebrating the patron saint of the pueblo. The streets were full of vendors, carnival rides for children, and, bien seguro, fireworks and music.


On the feast day of San Andrés, there was a "quema", an impressive fireworks display, which by the end of the evening, had fire trucks putting out a grass fire behind the church. The "quema" was quite spectacular, though, with sparks flying in all directions and two local bands accompanying them.


The church was laden with bouquets of flowers and the center aisle leading to the altar was adorned with an intricate religious sand painting of San Andrés and friends. It was a near life-changing experience. I now understand what George Bush must have experienced!!

Shortly after this religious awakening, was el Encuentro Regional de Niños Lectores en Lengua Materna in Puebla. Indigenous children from various cultural groups throughout the region came and read in their mother tongue and performed traditional music from their pueblos. It was a treat to see children proud of their cultural heritage and eager to share it with others. The banner reads, "My language, my heart".

On my way to see the Encuentro, I came across a demonstration of teachers marching toward the Ministry of Education to demand their rights. The group was peaceful, but the police were ready in case their demands became too strong. As it turned out, there was no trouble, and most likely, no resolution to the teachers' demands.

This post closes with the Festival Internacional de Jazz in Puebla. It was a four day event with workshops for the public by the invited musicians and eight excellent concerts by world class players. I went to four of the eight. They were all free and the venue was el Teatro de la Ciudad, a wonderful building in the very heart of Puebla. I sat in a box seat just overlooking the musicians. which made me feel like I was part of the group. Much easier than learning to play percussion! During one concert, I felt the floor of my box trembling, and thought that it was the enthusiastic participation of the audience. That night I found out that there had been a 6.5 earthquake in western Mexico. I guess that is what good jazz can do!

My daughter, Quena, and son, Joa, arrive very soon, and we are off to the warm, sunny, Oaxaca coast to commemorate Marie's parting. So, despite the Oregon winter, be warned to have your sunscreen ready before opening my next post!! Abrazos a todos.

Email ThisBlogThis!Share to TwitterShare to FacebookShare to Pinterest
Labels: Fiestas and Fireworks

The year marker has touched me, too. Thanks for sharing your memories.

Hola Deek, Great post, I love following you around Mexico. I know your time in Oaxaca with Quena and Joa will be meaningful. I am thinking of you all. Travel safe my friend.