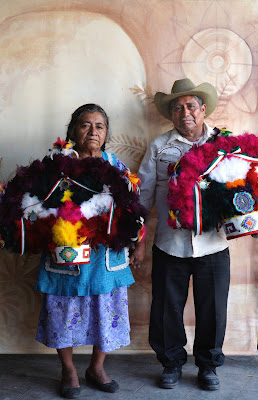 Elfego Lopez Luis and Soledad Valentin Navarro are feather artists. For over forty-five years they have dedicated themselves to creating penachos (headdresses)  for the dancers in the Valle Central of Oaxaca who perform La Danza de la Pluma (The Feather Dance). La Danza de la Pluma is a two-day long dance consisting of thirty-five different dances that depict the Conquista of Mexico by the Spaniards. The Spanish used the dance as a way to incorporate Catholicism in the native cultures, but it has also proved to be a vehicle for preserving indigenous traditions. Despite the fact that the Spaniards decimated the native populations by as much as ninety percent, their rich cultural traditions have survived and prospered. This is what gives meaning to the work that Elfego and Soledad do: preserving the traditions of their Zapotec ancestors. 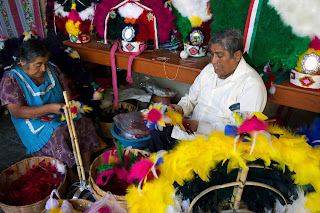 Soledad's father was a feather dancer and he also made penachos. As a child, she learned to make them working by his side. Elfego danced for three years in a local group and when he and Soledad married, they decided to dedicate themselves to making penachos. In time he learned to take accurate measurements and and build the frames for the penachos so that they are well balanced and comfortable to dance with. "What I like best about my work", he told me, "is that it has a purpose. It i a way to stay in touch with our roots and honor our ancestors. People seek us out to make their penachos and they appreciate our work".

In essence, what Elfego and Soledad do is draw with feathers. They are brought designs that the dancers want incorporated into the penacho and they have to figure how how to weave the colored feathers to create the desired design. Elfego commented that it is more than a craft; it is an art form. They both welcome the challenge and get much satisfaction from using their talents to please their patrons. 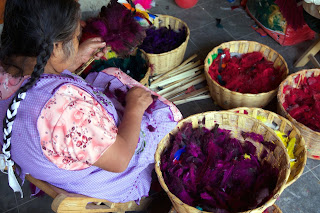 In order to maintain the large stock of feathers needed to make the penachos,  Elfego goes to small communities in the sierra when they have festive celebrations like weddings or quinceaneras. In the pueblos a large number of turkeys are slaughtered to make mole for the guests attending. Elfego gets permission to attend the celebration to buy the turkey feathers. He helps deplume the birds, a rather long and tedious job. But he enjoys the social aspect of meeting new people and sharing their traditions. "Both of us are happy", he told me. "Their job is done quicker and I get my feathers. After doing this, one realizes the value of a feather". 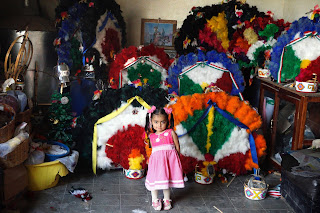 Elfego and Soledad have found a meaningful rhythm to their lives. In the morning Elfego goes out and works the fields he has planted with corn, beans and squash and Soledad tends to the things that have to be done in the home. And from mid-morning to near sunset they work on their penachos. Working from home allows them to be with their children and grandchildren and teach them their art form so that the Danza de la Pluma will not die out. "It is very important that we teach our children this because if we do not, our traditions will begin to die out. And if they die out, communities will not have their fiestas and cultural celebrations to give them a respite from their work. These are the roots of our ancestors and we must preserve them along with our mother tongue".
The wonders of technology have offered young people other often more tempting paths to follow as a livelihood and many of the old ways are slowly fading. However, the Zapotec pride that 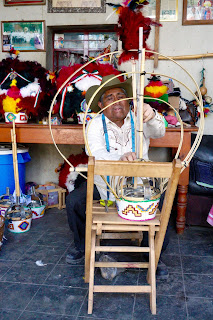 still flows through the veins of the indigenous peoples of Oaxaca gives hope that the Danza de la Pluma will still be performed for many years to come, and that the feather art of Elfego and Soledad will be continued by their children, maintaining a strong framework for the Zapotec rituals and traditions to survive and flourish in future generations.