No Matter Which Way You Look

For most of my life, I have been a firm believer in evolution. It seemed logical that as the millenniums passed, (wo)mankind would progress in a manner that would lead to a more peaceful and harmonious existence. I never expected that we would arrive at a perfect world, but I figured we would be able to look back and say, "Wow! Glad we have gotten our act together some since those days". The state of the world today has me seriously wondering if we have, if we really have learned anything from our numerous mistakes on this planet. 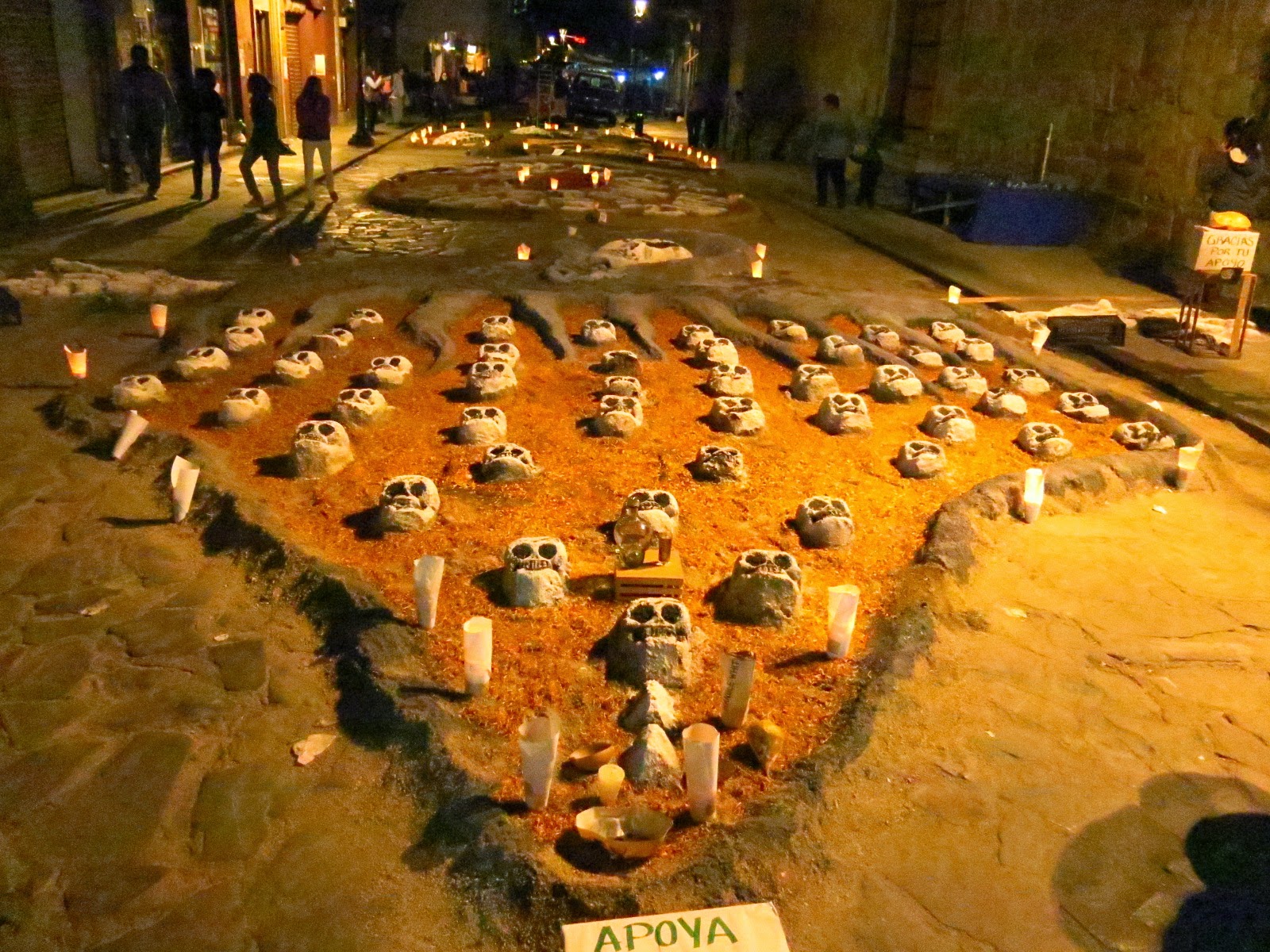 At first I thought that perhaps I was mistaken about what evolution was supposed to be, so I looked in up the Merriam Webster online dictionary:
1) :  a process of continuous change from a lower, simpler, or worse to a higher, more complex, or better state :  growth (2) :  a process of gradual and relatively peaceful social, political, and economic advance.This did not seem to be what was taking place in Mexico.The disappearance of the forty-three students from Ayotzinapa, Guerrero, has thrown Mexico into a state of rage and unrest. There has been sustained outrage the likes of which have not been seen in Mexico for many, many years. Not a day goes by without a front page story about the situation here. And as the communities continue to look for real evidence concerning the disappearance of their loved ones, more graves are found and DNA analysis confirm the remains are not those of any of the forty-three students! Who are they then? How many more are there?
The demonstrations grow and the government crackdown on them becomes stronger.
Today's headlines of La Jornada show a 18 year old youth in Chiapas lighting himself on fire in front to the government building to demand the freedom of his uncle, a campesino leader held since last May on trumped up charges. Popular protest art is again filling the streets and zocalo of Oaxaca. Roadblocks are an everyday occurrence here, and it polarizes the community at times. Frustration and a sense of total mistrust of the government fill the air.


But no matter which way you look, north, south, east, or west, it seems to be the same, injustice abounds. As the banner on the bus reads: If there is no justice for the pueblo, there will be no peace for the government. I have no photos of Ferguson or Michael Brown. Nor of New York City and Eric Garner. They are not necessary, your eyes have seen it all. And it appears that people everywhere have had enough, ¡Basta! Maybe this is evolution in process, if it can stay peaceful and focused on meaningful change. There are indeed signs of that here and in the US. Tomorrow there is a gathering and concert calling for justice and solidarity with Ayotzinapa. 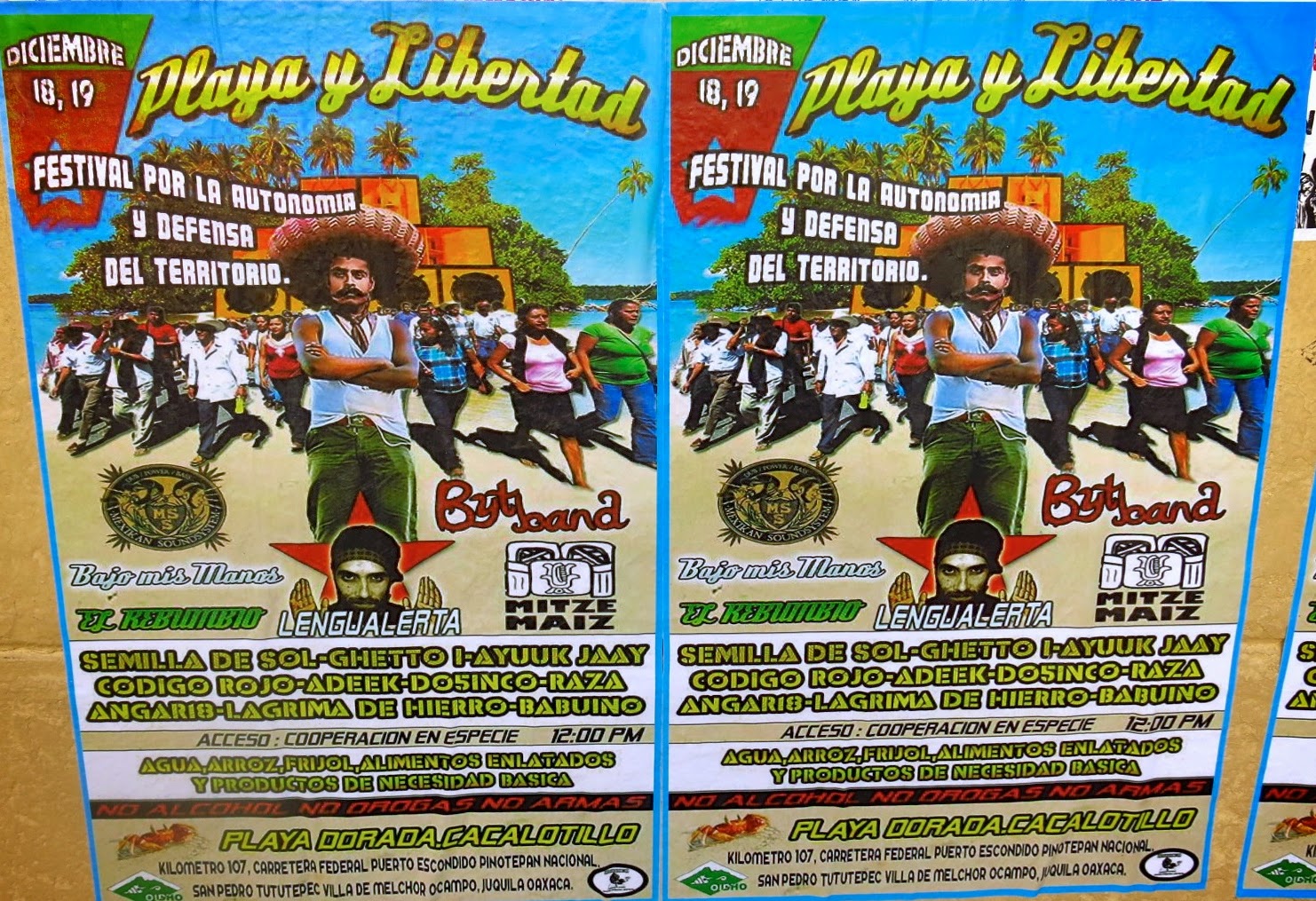 And later this month there is another gathering of hope on the coast of Oaxaca calling for the defense and autonomy of territory.

So as people in Mexico and Ferguson, and New York fill the streets to call for justice, let's hope that someone listens. And may some of those who listen be those in power who can decide that indeed "enough is enough!", and take action to bring about real change. Then I can go back to believing in evolution, in believing that when my time comes to leave this earth, I will feel that we are a kinder and juster species than when I first set foot here.

Deek,
Thank you for making the connection between these two phenomenon of violence and apathy. Now we need to see if we can sustain our attention long enough to understand what we are dealing with. Listening with hearts open and fearlessly searching for the truth will surely get us closer.
Susie

I really appreciate your making the connections that you make in this post. And unfortunately there are others than can be made: the situation in Palestine, Syria, etc. Unfortunately the list goes on.

This makes voices like yours all the more important.

I so appreciate this post Deek. I have been pretty bummed about the murder of these kids and all the other children killed because of some adults identification with their own greed, hatred, and delusion. Keep it coming because it is important to voice the Truth. Meanwhile I take refuge in this music. Take 11 quiet minutes to watch this. It helps to practice loving-kindness for all sentient beings.
Be well as you navigate the world and your heart!
https://www.youtube.com/watch?v=DzPTHstpJ2I

Dick
If you put an “r” in front of evolution, you get revolution ... another kind of change. Webster’s defines it as not only a “forceable overthrow of a government or social system”, but also “a dramatic and wide-reaching change in the way something works or is organized or in people's ideas about it.” Revolution doesn’t have to involve guns and force. It can be “velvet” or “singing”; peaceful and rooted in justice.

When I think of change, I think of what the philosopher and priest Thomas Berry wrote in his book The Dream of the Earth. Berry describes three ways that change occurs. One is from within. Good people spend their lives in politics, or business or social work or education or art or whatever, trying to alter the system in incremental and meaningful ways. This is kind of like the “evolution” that you talk about, Dick.

The second way that change commonly occurs is from outside. Berry calls this revolutionary change. In this case the system is replaced by something which the revolutionaries believe to be totally different, in their mind, better. Revolutionary change has had mixed results. Often the idealism does not work as imagined when faced with the day to day realities of the world and human nature. Still, many people believe in this path so strongly as to follow it for years, even decades, and die for it.

Berry describes a third kind, what he calls creative change. This is represented by the many numerous groups and individuals using our human gift for problem solving and creative thinking to try new ways of doing things, often through trial and error, usually building on the wisdom, experience and knowledge of our ancestors. These people have the fervor of the revolutionary in their beliefs but also understand the need to be integrated within the existing system. They are best described in Blessed Unrest, a book by Paul Hawkens. The book is about “the incredible numbers of people around the world filled with love for neighbor, and for the earth who are resisting, remaking, restoring, renewing, revitalizing” (jacket quote from Bill McKibben).

Thinking about these people gives me hope. We are a part of this group. We live our lives in a manner consistent with our beliefs, do what we can, choose a few causes and battles to fight, give money and time, and as Suzanne would say, “do the best we can”. At times, there arrives a “tipping point” where we come together on the streets, in front of institutions and on-line to say we have had enough, this is not acceptable. Maybe we are at such a tipping point now, like the late 1980’s when the Berlin wall came down and the Soviet model of human control collapsed. Maybe it is time for the capitalist model to face a similar reevaluation. We often are lead to believe that capitalism and democracy are one and the same. They are not. Democracy is the tool we can and must use to change capitalism. And that change will require a blend of evolutionary, revolutionary and creative approaches.