After weeks of having my two tables and eight chairs empty, the heavens opened, filling my home away from home with the joyful sound of friends. They came from both sides of the Atlantic, creating a linguistic stew that had me speaking French to Mexicans, Spanish to French speakers, and English to no one. Pero c'est pas grave, todos entendimos en una manera ou autre. Know what I mean?


After Joa and Quena left in January, I had a short, but very sweet, visit from my dear friends Claude and Lee. They arrived here after a decadently relaxing stay in San Agustinillo on the Oaxaca coast.
Although Cholula is no match for the tropical, laid back life on the Oaxaca coast, the warmth of a long standing, true friendship made for a wonderful week together. Days were leisurely spent reading, doing Sudoku (they are world class practitioners) and watching Hortensia, our sole surviving turkey, parading around the yard fertilizing the newly planted grass. We took a few day excursions to Puebla, Tlaxcala, and Atlixco, and in the evenings we enjoyed the culinary delights that Puebla is known for.
After Claude and Lee left, I had a few weeks alone time again, and as usual, the seemingly endless string of fiestas and cultural events filled the time nicely. Seldom a dull moment. The money spent on cohetes (extremely loud exploding fireworks) must rival the US Dept. of Defense weapons budget. Cohetes, along with the incessant ringing of church bells, is living proof that the Maya prophesy has not yet come to pass. Cholula is alive and vibrant!

February 2nd was the feast of the Candelaria, a day for the blessing of the countless Baby Jesuses that appear everywhere you look at this time of year. Large sums of money are sent to dress them quite divinely, and on the day of the blessing, there are processions through the streets, masses in nearly every pueblo, and tamales for everyone after the blessed event. And of course, there are even more cohetes exploding in the heavens than Niño Jesuses getting blessed. Sometimes I wonder if Halliburton isn't behind it all! There is a fortune to be made here.

Also in February was Carnaval, another good excuse for cohetes, tequila, and celebrating. Vera Cruz is best known in Mexico for its celebration, but Cholula does not pass up a chance for a good time. I was not here for the full blown Carnaval as I was in Oaxaca. But I did get to experience the preview in San Pedro in late January. Mexicans really do know how to enjoy themselves. In case anyone is impressed by the costume of the cavalryman, I am seriously considering importing the pony strap-on to Oregon. I think it could be a huge hit at the Country Fair!

Then in early February, the long awaited gathering began.When Marie passed away, her good friends in France were not able to bid her farewell as they would have liked. Distance and circumstances prevented that. So four of them thoughtfully arranged a gathering in Cholula to bring a much needed closure to their special relationships with Marie. Michel and Myriam were dear friends that go back to university days in the late sixties. Lena and Helene had known Marie for over thirty years and were among Marie's closest friends. Coming to Mexico to grieve Marie's loss and celebrate her life was something very important to each of them. I was honored to have them come.
Lena arrived on February 10th, a week and a half before the others. Marie and I had spent many wonderful days at her house in Villenueve-les-Avignon. We always felt at home there, good food, good wine, lots of laughter and an enduring friendship.
Lena and I took a short trip to Tlacotalpan, a a tropical river town in Vera Cruz full of color and culture. It is one of those places where it seems that time really has stopped, small restaurants overlooking the river offering deliciously fresh fish, shrimp, crayfish accompanied by an ice cold beer. So much to sketch; Marie would have loved every minute of it!
Helenita, Myriam, and Michel arrived on February 21st and we headed off to Oaxaca, one of Marie's favorite spots in Mexico, to pay her homage. I had a piece entitled A Sketchbook Journey in Mexico published in the Jan. - Feb. 2012 issue of Skipping Stones Magazine. Among the sketches included in the issue was one of Domingo, the night watchman at Casa Arnel, the hotel where Marie always took her groups.
I brought a copy to Domingo and he proposed that we come to his house for a tribute to Marie. It was a day filled with emotion and fond memories. Domingo had made a small altar with a picture of Marie and a vase of flowers. He gave a short eulogy, fondly remembering Doña Marie and the times they had spent together at Casa Arnel. It was a very touching moment for all of us.

After our day with Domingo, we took a bus to Monte Alban, Zapotec ruins which appear in several of Marie's sketches. It is a magical place and we decided that the best way to pay homage to Marie was to sketch. The day was cloudless and we were nearly alone in the sacredness of the place. I sat in the shade of a small tree and did this sketch in honor of Marie.
Our final Oaxaca tribute was done in the studio of Demos, a friend of Marie and mine. Marie had invited Demos and his two daughters, Erendira and Itza to a three day workshop she did in Oaxaca in 2010. They did the wall art that appears at the top of this post.
Demos proposed that we play with colors, one of Marie's sketching tips, in memory of her. He brought out a small container of cochinilla and other natural pigments,  gave us some good paper, and let us go at it. We finished the evening with a few toasts of mescal, a fitting way to bring closure to our tribute to Marie.

Now la casita is empty once more, but the joyful laughter of good friends still rings clearly in my ears. My 180 day sejour in Mexico is coming to an end, and it is time for me to start wrapping up the projects I have been working on here. We have received over $1000 in response to my request for support for the library project  in Ayotzinapan. I will be sending out update information on how the money will be used very soon. Thank you so much for your generosity. 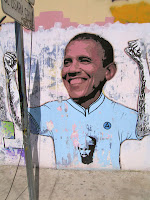 I will close with a final piece of Oaxaca wall art that I found interesting. Please do not forward this to Rick Santorum! This could be enough to give the Republicans the presidency.
Abrazos amigos and I look forward to seeing many of you again in mid to late April when I return to Corvallis.
Posted by Dick Keis at 10:58 AM

Hi Dick - so wonderful to read your blog. Where are you off to now? Wanted to suggest you make a PayPal button - incredibly easy after you make a PayPal account and sign in just go to Merchant services and make a buy now button. Email me if you like miraguy AT gmail.com if you want help. Also Kickstarter is a great way to raise money and a project like this will be successful. I'm hopeless at getting to the mail so if you do PayPal I'd be happy to contribute something - love to you Dick. Are you coming back to the US?

Hello Dick, nice to have good news from Mexico. Have you seen pope Benoit in Cholula. Big kisses from Jean-Yves