The Unmaking of a Nation: A View from South of the Wall 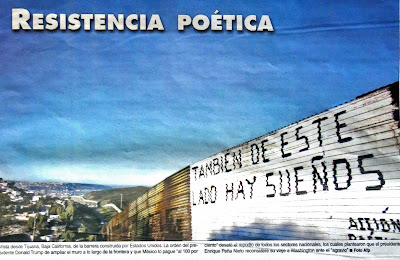 As I prepare to hang my photography exhibit, Reflejos del Alma en las Manos, (Reflections of their Souls in their Hands) celebrating the warmth of the Mexican people, their culture, creativity and incredible work ethic, Donald Trump begins building his wall. The headlines of today's papers throughout Mexico focus on preparing for the mass deportations that Trump has promised.

When I come to Mexico each year, I am asked at immigration, "how much time do you want señor"? I am automatically given a six month visa with the possibility of renewing it by leaving the country and reentering. I have never been hassled by police or immigration people while in the country. They have always been more than willing to be helpful and have treated me with much respect. But today via Facebook I received a petition to sign to the Minister of External Affairs requiring American citizens to have a visa. It is only far, no question about that. We have had a privileged free entry to Mexico for many years. Mexicans have not had that same free entry to the USA. But it  saddens me greatly to see that things are evolving (devolving) in that direction. I feel almost as much Mexican as I do American. I, like my Mexican neighbors, am deeply offended by Donald Trump.

My day to day life here in Oaxaca is filled with good encounters with the locals.  Conversations spring up easily. "Oregon! I have a cousin who lives in Portland", or "I lived in LA for six years, lots of my family are still there. I wanna go back some day". There is a camaraderie that quickly develops, as if that imaginary line, soon to be a wall, did not exist.

Lately the questions have changed. "What do you think of your new president"? How did he ever win the election"? The first question I answer without hesitation, and impress (or shock) the person asking the question with my arsenal of foul language and explosive expletives. As for the second question, I find myself almost speechless. I try to explain the broken political system in the US, the unnecessary poverty and alienation in a nation that has no reason to harbor it. I am ashamed. 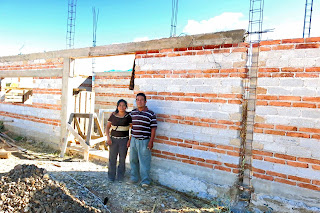 Mexico and the United States have a long history. We are neighbors that are intricately bound together. It is not just the United States that matters. As the writing on the wall in Tijuana (photo Resistencia Poética) so clearly states, "We have dreams on this side as well". Donald would not know about that. But those of us who live here or spend a lot of time in Mexico do. This weekend I was invited to a fiesta in the pueblo of San Juan Guelavía. The family that invited me received me warmly and invited me to their home. It was a wonderful home, still in the process of becoming even more wonderful. As they were showing me around, Teresa said, "well, we have this dream." Without hesitation I asked if I could photograph them with their dream, and they gladly agreed.
Teresa, Alberto and their two children lived in LA for ten years. They came back voluntarily to work on their dream. Both rise at 5am to go to work and return from their jobs after dark. On weekends they have a bit of time to work on the house. They are happy, positive, hardworking people. The wall that my friends stand beside in this photo, I am in favor of 100%!

So, what to do in this extremely dark and depressing time! I know that I am not the only one asking that question today. What does bring light to the situation is the amazing solidarity and resistance that is developing in the US, Mexico, and around the world. Our world has been shaken up violently, and we are responding in a peaceful and fearless manner. Perhaps we needed this wake up call, as disturbing as it may be. Millions of people around the world live this reality daily. Maybe now we can be more understanding and supportive of their situations. We are standing strong in front of the madman in the "Casa de los Blancos (the house of the white people), as the press here has begun to call it. and we must not let up. 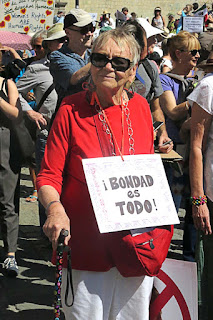 As the sign to the right says, "Goodness is Everything". Let us hope that the old Hollywood adage that "Good Conquers Evil" is still in the script. If not, we will have to rewrite it from a new world view. One that is more understanding and more encompassing. One that understands what tyranny is, and what it feels like to lose your basic freedoms. We are not there yet, but I fear we are only steps away if things do not change quickly. And as far fetched as it seems now, perhaps I could be arrested upon my return to America later this spring for writing this blog. Big brother is watching.

Nice to hear another perspective Deek.

We must keep fighting for our unity.

I am proud ~ you are doing good work!
Shawnita

Good for you Dick. I somehow feel he'll just overstep the line (if any lines remain!) and he'll be out. Reason and truth have to prevail.

It is an extremely dark and depressing time, that's for sure.

If you haven't seen the Indivisible Movement document, you might want to take a look. https://www.indivisibleguide.com/web/