Poems of Resistance and Acts of Love


The sad events taking place in Oaxaca and other parts of the world have moved me to think about resistance and people’s willingness to risk imprisonment and death for their beliefs and values. Spending six months a year in Oaxaca has given me an opportunity for first hand experiences. I have worked with some of these maestros (teachers) who were recently attacked in Oaxaca and heard personal stories that helped put the situation in perspective for me. 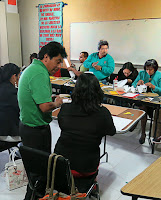 In March 2015 I was invited to give a bookmaking workshop to a group of maestros at El Centro de Maestros, in Nochixtlán, an hour and a half from Oaxaca. This is where the recent attack and killing of eleven people occurred. A group of thirty eager teachers devoured all I had to offer them and asked for more! They were wonderfully dedicated individuals who work many more hours than they are paid for, and many work under extremely difficult situations in very isolated communities. But they are devoted to providing the children with the best education that they possibly can. It is more than a job; it is a mission. The poster on the wall in the photo to the left reads: “Education is an act of love, an act of courage, it is a practice in liberty directed toward reality that does not know fear, but rather seeks to transform it through solidarity and fraternal spirit. (Paolo Freire) 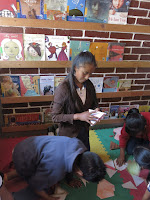 Earlier that day, one of the teachers had invited me to give a workshop at his small rural school in a nearby pueblo. It was a peaceful, well kept school with a fine little library that the teachers were very proud of. The inscription on the wall  outside reads: "Education does not change the world; it changes people who then change the world". The children gobbled up the bookmaking project just as the teachers had. They were eager learners taught by dedicated teachers. It was an honor to have been invited to work with them both. 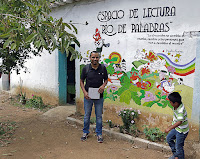 A few weeks later, I was invited to Juchitán de Zaragoza by my friend Ana Matías, editor of Revista Sinfin, to be part of a book presentation of Los 43: Poetas por Ayotzinapa. Juchitán is an indigenous city that has seen much political struggle in its history. There is much concern over the disappearance of the forty-three students in the state of Guerrero. The reading was held at la Biblioteca Victor Yodo, a small neighborhood library created to honor Victor Yodo, a Zapotec activist who was 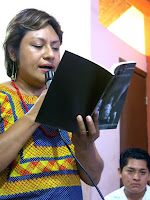 “disappeared” over thirty-five years ago for his social organizing. Victor’s daughter Irma, https://orionmagazine.org/article/endangered-language/, a celebrated Zapoteca poet, read a poem about her mother's strength and courage since her husband was taken away by the army. In her poem, Cándida, Irma asks: “With what words do we explain to a child what a missing person is, with what unit do we measure absence, the days of darkness, the unanswered letters to government officials…” Unfortunately many people in Mexico have posed those same unanswered questions. Repression is strong, especially if you are indigenous. It takes much courage and conviction to stand up for what you feel is right and just. Irma’s mother sat alone and thoughtfully listened to her daughter’s words, remembering only too well what had happened to her husband. She is very active in the teacher’s union and is a strong supporter of their resistance to government demands for an educational reform. She is not afraid. Several other poets were also present to read their poems. It was a very moving event, a testimonial to the resistencia shown by many Mexicans toward a government that tries, without success, to repress them. Twelve hundred copies of Los 43 were printed and distributed free at a series of reading throughout Mexico to pay homage to the missing students.

I cannot help but wonder what my wife, Marie, would have done in reaction to these recent events. She was very sensitive and aware of the injustices that were taking place around her. Several of her sketch-collages targeted the injustices that she perceived while in Mexico. They were her poems of resistance, her acts of love.

I believe that the resistance will endure and I fear that the repression will continue. I pray that there will be no more violence and bloodshed, but that is not evident. The government is threatening to attack the teachers again as I write this. The crisis in Oaxaca is dividing communities, with many people supporting the teachers and others strongly opposed to the tactics they use in their resistance. Lives have been lost, businesses forced to close, and friends pitted against each other as to how to resolve the situation.

I do not claim that all teachers are as dedicated or qualified as those I met in Nochixtlán. There are some who should not be in classrooms. Corruption is pervasive in Mexico and the teacher's union has not escaped its clutches. But I do firmly believe that the vast majority of teachers are dedicated human beings trying their best to help children learn. They are poorly paid, lack essential materials to do their work, and have to overcome enormous hardships to do their jobs. This crisis is about much more than just educational reform, but I am not qualified to expound that. I can only say that I have met and worked with teachers who I would be proud to call my colleagues. They have some very legitimate demands that need to be addressed. I sincerely hope that dialogue between the teachers and the government can resolve the problems soon. I am certain that bullets and burning will not.

Dick, this is a very informative and powerful essay. Easy to tell that Marie is still your guiding spirit and I'm sure she would be/is so proud of you. Gracias y abrazos. Colleen

Thank you for posting this. I need to be better informed about the situation in Oaxaca. I appreciate how you balance the sense of urgency and passion with the recognition in the final paragraph that this, like all human situations, is complicated. Please keep posting!

Thanks for sharing your thoughts papito. I hope things get better soon.