Heavy Metal: the Craft and Music of Don Jorge Díaz 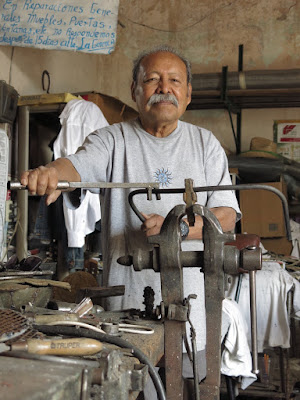 Heriberto (Jorge) Díaz is a blacksmith. He has been working iron for fifty seven years, loves his trade, and has no intention of stopping soon. He works with his brother, Moises, in both the construction sector making spiral staircases, barred windows and metal doors, as well as forging wrought iron products that are more decorative and aesthetic. They compliment each other well: Moises is more prone to the structural part of the trade and Jorge, by preference, chooses to work at the forge, crafting items that give him more freedom to create and experiment with new ideas and forms.


After finishing primary school, Jorge, like many youth of his generation, looked for a trade that would provide him a living. His father was a "mantelero" a weaver, who had two looms set up in his home and wove curtains, bedspreads and other textile products. However, Jorge decided not to follow in his father's footsteps as he did not see much of a future in that trade. At age seventeen, he was accepted as an apprentice with a welder, who, he came to discover, was also a master blacksmith. 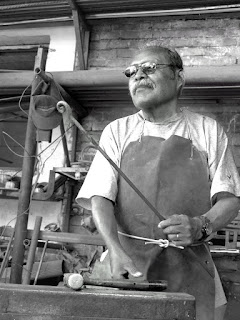 "I could have learned so much more from "el maestro", but I didn't pay enough attention. I was young and not thinking of the future." But over time, Jorge has learned very much. He had the opportunity to work with some very gifted tradesmen and architects who shared their skills with him. Jorge would like to share the skills he has crafted over the past fifty seven years, but he cannot find anyone interested in taking up the trade. His three children are all university educated and have good jobs as professionals. Other young people are more interested in jobs in technology than in a trade like blacksmithing. When he and his brother retire from the trade, there are no takers. His shop will close.

But in the meantime, he goes on working. He has dedicated himself more to forging. He explained, "there is a lot of competition for the building trade work. But I saw that those who could forge were dying out. It left a space for me to fill." Forging also gives Jorge an "artistic license" to create and explore. He has become a master at working iron, and the forging is what gives him the most satisfaction. 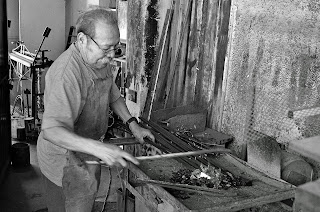 Over the past year, a friendship has developed with Jorge. I stopped by on several occasions in the late afternoon to find him sitting in one of his wrought iron chairs playing his guitar.When I asked him about it, he told me,"In this life it is very important to do things to satisfy oneself. Life is not just about working, taking care of your home, and doing the the things necessary to live from day to day. Someone once told me that if you have a talent for painting, drawing, music, or writing verse, you should cultivate that talent because it will serve you well in life. For me it is music. Music is mental, emotional, and spiritual. In times of need, it serves me better than any medicine can."

So at the end of each day, Jorge leaves his forge, grabs his guitar, and lets his mind and body slow down and relax. He plays traditional Mexican music, but to me he is redefining the term, "heavy metal". To me it is the relaxing music that a blacksmith plays at the end of a hard day's work.

What a moving reflection, Dick--one that calls attention to both change and continuity. It seems both positive and yet also sad that there is no one to continue his craft.