Marie never tired of stopping to sketch the landscape of the high desert surrounding us. It was often on bicycle to Muñoz, a nearby pueblo, to check our e-mails at the butcher shop/internet café that the scene was most striking. I would often be in front, pedaling hard on the uphill slope in hopes of beating the mid morning heat. When I looked back, I would see Marie straddling her bicycle, sketchbook in hand, capturing the moment. 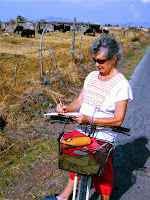 There were two roads leading to Muñoz, a little traveled, bumpy, dirt camino that was scenic and peaceful, unless, that is, a bull had gotten out of the corralled area that ran the length of the camino to Muñoz. It happened more than once. Several locals had warned us that if we encountered one bull in the road between our destination and us, we best turn around, and fast. A bull alone, it appears, is more likely to attack than bulls in a group. We never decided to see if that was true or not. The size of the creatures and the fact that el toro de lidia was raised to fight in the corridas, was enough proof for us. 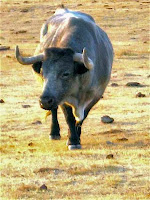 The second route, the one most frequently taken, passed in front of an old hacienda before arriving at Muñoz. The bulls were usually in the pasture grazing, but the fences were sturdier and in better condition due to the fact that there was more traffic on the asphalt road. It was also a frequent watering point before starting an uphill pedal that could be quite tiring with the heat and the wind. Again, el Popo and Itza were often in view. There was starkness to the landscape, high desert terrain that was dry, and at times, extremely dusty. Yet there was a definite beauty to it, maguey and nopal cactus scattered about, heat waves quivering above the blacktopped road, and sheep and bulls grazing leisurely behind the hacienda fences. It made going to Muñoz a treat, a journey through a forgotten land that maintained an undeniable authenticity and flavor that characterized Tlaxcala. In the sketch at the top of this page Marie once again reflects: “When I am here, on the road to Muñoz, with this countryside in front of me, I know why I am here!"
Muñoz was a pueblo a bit larger than Atlangatepec. It had amenities that Atlanga did not: a bakery, a few small torta restaurants, a hardware store, and two butcher shops. One of these butcher shops belonged to our friend, Arturo. He had spent a few years in Chicago and enjoyed speaking a bit of English now and then. His brother, Luis, had a small internet café connected to the butcher shop, about eight computers that were all occupied once school was out at 1:00 pm. It was a surrealistic sight, a side of pork hanging from a hook through the doorway between the two businesses. Muñoz was situated at over 8,000 ft, and the cold wind that passed from the open butcher shop storefront through the internet café, keep the meat fresh and our stays short. It was convenient, however, when our dinner menu included carnitas, something Marie made once in a while, accompanied by a delicious pico de gallo made with cilantro and chiles manzano from the greenhouse in back of our house.
The road going the other direction from Atlangatepec brought us to la Laguna, a bird refuge on the north side of the pueblo. We went there often on our bikes, passing in front of pastures of grazing bulls and an old hacienda situated in the high desert landscape surrounded by maguey and nopales. It was a very peaceful place with fantastic cloudscapes and locals out fishing in small rowboats among the high reeds where the birds nested and the fish sought cooler water. It was a place stuck in time, cowboys on horseback and shepherds sitting in the shade watching their animals graze without a care in the world. We would seek out the shade of a juniper tree and start sketching. El Popo and I Iztaccíhuatl were almost always in view. One day we met Jose, a young Tlaxcalteca on the road. He was a pulquero, a person who tended to the maguey plants and made pulque, a traditional alcoholic beverage that dates back to the Aztecs. We talked for a while and he invited us to taste some of his home brew, and we gladly accepted. In the sketch to below, Marie noted that as Jose took us around to see more of the plants, she stayed behind to draw the flower of the maguey, which from her perspective, seemed to emerge right out of “La Malinche”. Our day with Jose was one of those events that happened time and time again, a random encounter that led to a personal connection that endured.

There were many such encounters in Atlangatepec that year. It was a very small pueblo, and being the only “gringos” in the area, we were under constant scrutiny. We wanted to meet people and become part of the community, something much more delicate and complicated than we had imagined. There were definite cultural stumbling blocks, and we tripped more than once in our effort to form friendships with the locals. But for the most part we were successful.

One of the first friendships formed was with Jema and Rafael (Rafa). They had a small dairy farm with about fifteen cows. We would walk to their farm to buy fresh milk and some of the delicious “queso frescos” (fresh cheeses) that Jema made. They also were “outsiders”, having moved to Atlanga fifteen years earlier to help establish an agricultural cooperative. When the project ended, they decided to stay on. Rafa was a veterinarian who turned his knowledge to raising dairy cows. Jema learned how to make the cheese and went door-to-door selling her products. Over time, we became good friends. Marie asked Jema if she could sketch her before we went back to the Sates, and Jema agreed. They invited us for dinner one night and after a delicious meal and a few shots of tequila, we went to the living room to listen to Rafa play music and for Marie to sketch Jema. On the page she wrote: “Gracias Jema for letting me sketch you. Sorry that I was not able to capture your true beauty. Gracias Rafael for sharing your love of the music and songs from Durango. And to both of you, gracias for your friendship”. She had a high quality copy made for them, put it in a simple frame, and gave it to them as a gift of our friendship. They were very touched. When I look at this sketch, I can still hear Rafa singing and taste the ricos taquitos that Jema prepared for us that night. The same is true of almost all of the sketches in Marie’s sketchbooks. They are moments captured with sensitivity, emotion, and simplicity that are timeless.
We also developed a strong friendship with Clara and Concepción (Chon) and their two young children. Clara raised chickens and eggs to sell in the organic market in Tlaxcala. Chon worked in his father’s fields growing organic vegetables. He had decided that he did not want to leave his pueblo to go to Canada to work like his brother. He preferred to have less money and live in a simple house instead of leaving his family for long periods to go to “el otro lado”. They struggled financially, but were happy. Chon was leader of an Aztec dance group that performed in nearby pueblos on special occasions. He invited us to a practice session at his house one afternoon. 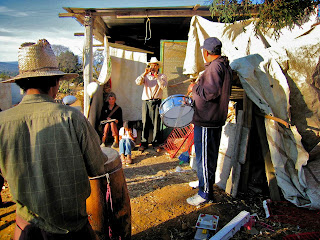 We had been to their house several times before, but never to hear them play music. They told us that the music they were playing was to ask the gods for a bountiful harvest. Marie settled in to sketch and I to take photographs to give the group for promotional purposes. Chon’s daughter, Maria, sat next to Marie with her pencil and sketchbook. Under her sketch of Chon Marie wrote, “Maria is sitting next to me drawing. Too bad she doesn’t have the color pencils I gave her yesterday”. Maria sat intently and sketched her father and his friends. She captured them quite well. She had seen them play many times before, but perhaps this time she saw them in a new light. 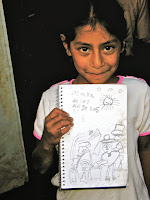 From Bobbie and Jean-Louis: another lovely blog, Dick. You write really well and do honour to Marie's sketches. And what's more, it's a real pleasure to find someone whose punctuation is perfect!
Keep them coming and much love.

Dick, these stories mean a lot to those like me who knew Marie only in her life in Corvallis. I appreciate your sensitive sharing of that last beautiful and painful time in Mexico. Mary S.

As always, I really enjoyed reading this Dick. You capture the richness of your and Marie's life together so well. Thank you so much for sharing your experiences and keeping Marie's memory alive. I know that she is with you in spirit now.