All that Glittered, Was Once Gold 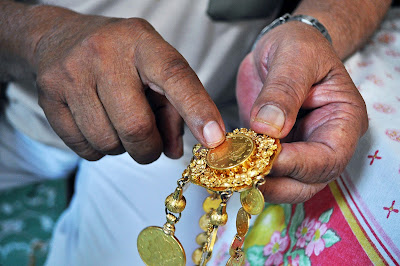 I have walked in front of La Esmeralda Relojería numerous times in the past two years on my way to la Casa de la Cultura in Juchitán. It always caught my attention, reminding me of a storefront in Habana or el Puerto de Vera Cruz. The pull down metal door was wide open exposing the glass counters filled with jewelry, clocks and watches. 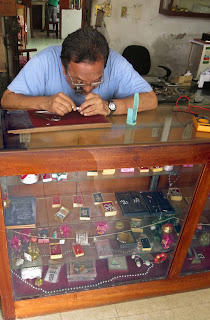 There was always someone sitting in the entryway, often an older, gray-haired man visiting with friends.  I wanted very much to ask if I could take a photograph, but I was too shy, too afraid of being refused. But this time I decide, “why not, they can only say no”. But they didn’t!

I greeted the gray-haired man sitting in the entryway and approached the man working on a watch at the counter. I told him that I was working on a book project about “oficios” and showed him the 5x7 booklet I always carry with me of photos I have already taken of people doing their job. He recognized a few of the Juchitecos in the booklet and said it was fine to photograph him working, but asked me to make sure to take a few shots of his father, Vicente, the gray-haired man in the entryway. I agreed and told him I would bring him the photos a bit later. 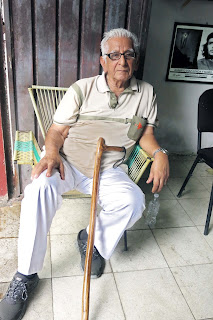 And so the story began. I arranged to come back later to shoot and to do an interview with him. When I returned, José showed me into the living area behind the workshop and told me he would get his father. It was then that I realized that this interview would not be with José, but his father Vicente. La Esmeralda was his creation.

Don Vicente Fuentes Pineda is eighty-nine years old and has recently retired from his profession as jeweler and clockmaker due to failing eyes and trembling hands. But his mind is steady and sharp, even if his hands and eyes are not. He had no trouble looking back over the past eight and a half decades of his life.

As so many of the people I have interviewed, Vicente finished primary school and took up the trade of jeweler. He worked with his brother-in-law in a shop that made gold jewelry and sold precision Swiss clocks. After a time, Vicente decided he wanted to learn how to assemble and repair the clocks they sold. So he left his wife and two children and moved to Mexico City for a year where he found a relojero (clockmaker) who agreed to take him on as an apprentice and teach him the fine art of assembling and repairing Swiss clocks. When he finished his apprenticeship, he returned to his family in Juchitán and continued working with his brother-in-law in La Esmeralda. 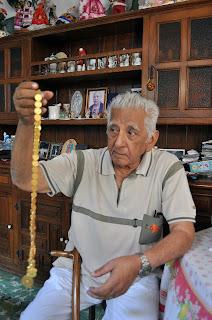 I had gone to a vela (popular festival) in San Blas, an indigenous pueblo close to Juchitán, with a Mexican photographer friend who had invited me to accompany him in 1998. I was very impressed by the Juchiteca women that were decked out in amazing displays of gold jewelry. Even some of their teeth had gold caps! I found that it was not gold plated jewelry they were wearing, but pure gold. I was told it was a way of showing your social status in el Istmo.


Vicente was one of the jewelers who made those pure gold necklaces, bracelets, and earrings. He told me that when he was younger, gold was much cheaper. What then cost ten pesos now costs four hundred. He used to make chains and bracelets of pure gold coins that weighed 100 grams (3.5 oz). Besides showing social status, Vicente said it was more importantly a way of having capital to pay for the harvest when the rains came. Juchitán and the surrounding pueblos have a gold- based economy. The gold is pawned to cover the costs of the harvest, and when it is over, the woman buy back their gold jewelry. The same process goes on to this day.

Unfortunately, times have changed. Organized crime has moved into the Juchitán area and it is no longer safe to wear the gold jewelry in public. Instead it is stored in safe deposit boxes and brought out only when it is exchanged for cash for the harvest. 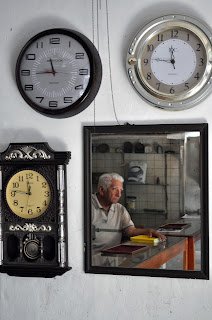 When it was close to my departure, Vicente sent his grandson, Diego, out to find me at la Casa de la Cultura. As a thank you for the photos I gave him, he sent me a stack of fresh totopos (traditional corn tostadas from Juchitán) and a piece of queso seco (Parmesan type cheese) for the trip back home. He is a man with heart of gold!

Vicente lost three of his sisters during the past year. All were over eighty. As he approaches ninety, he is still very alert and full of life. But he knows the clock is ticking. Luckily, he is a master clockmaker and knows very well how to deal with time. He could be with us for a long spell yet. I hope so.
Posted by Dick Keis at 8:24 AM

I love your stories. Not just those about the officionados, but of your journey with the people you meet. You bring these people to life and I feel like I am there. Miss you. See you in the spring.

Usually I read your posts right away, but the holidays, a cold, and our recent spate of bad weather (we are in our fourth day of no mail or newspaper, and another storm is coming in) slowed me down.

Vicente's story is fascinating, as always. And you are right: all they can do is say no! Keep up the good work.

such a sweet story. I love reading your blog and keep us updated to your where abouts! sending love!